High in the sky above Lake Superior…checking out the ice 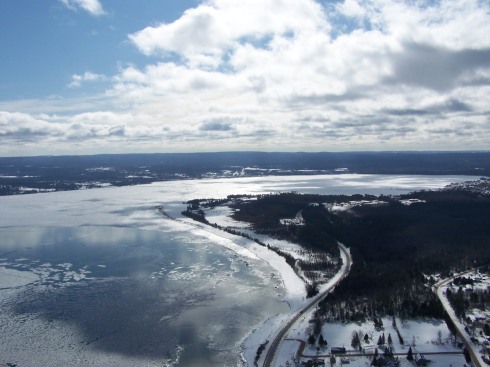 No, I did not go up in an airplane.  No, these are not my photos.

These aerial photographs come to you courtesy of  Barry’s fishing buddy, Mike.  Mike owns a small two-seater plane and he headed up into the friendly skies above our shoreline along Lake Superior last Friday.

He emailed his photographs of Keweenaw and Huron bays to the L’Anse Sentinel, our weekly newspaper (where my husband just happens to be the editor)  and I begged Barry…begged, mind you, blog readers…just for you…to ask Mike for permission to publish them here.  Mike thankfully agreed. 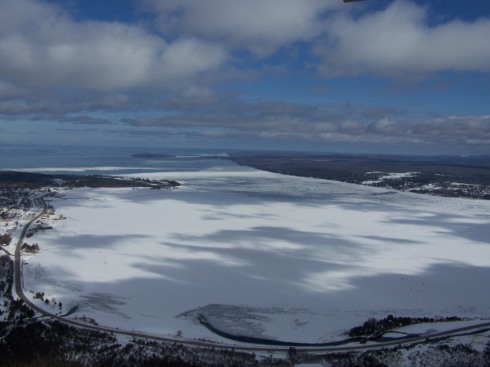 Looking northeast from the Head of Keweenaw Bay

I interviewed Barry about Mike’s plane a couple hours ago.  He says Mike likes to fly his plane about once a month during the winter.  He stores it in a hangar up at the Houghton Airport and keeps his eye open for a nice day.  Apparently last Friday met all requirements.  Up he went. 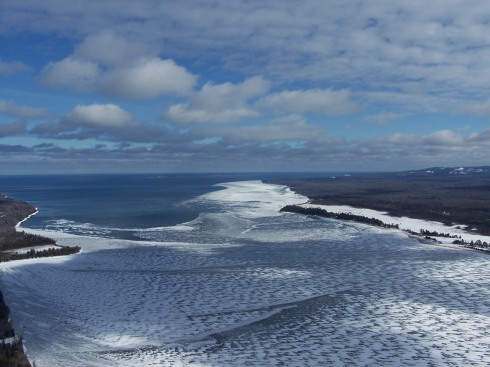 Looking north from the Huron Bay (Reed's Point on the left)

Strangely, Nancy and I were visiting the heronry on Friday and heard an airplane overhead.  “A plane!”  she exclaimed, “Let’s wave at it.”  We peered into the heavens.  The plane flew north of us.  We didn’t get the opportunity to wave wildly from the ground.  I am now 99.9% convinced that it was Mike’s plane.

Who would have guessed we’d have his photos a few days later? 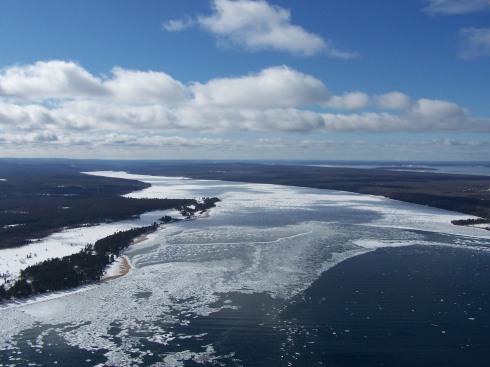 Looking south in the Huron Bay

Back to my interview with Barry–about Mike and his plane.  He said the boys have been speculating about where the end of the ice might be.  They are all ice fishermen and want to know.  He is convinced Mike flew upwards into the sky just to check on the ice.

The ice fishermen are restless with minimal ice cover so far this winter.

Mike opens the window of his plane and sticks his camera out to get the photographs, attempting not to get pictures of the airplane wing.  It’s freezing cold outside the at that speed and altitude.  Brrrr….

I really want to thank Mike for allowing me to publish his great photos.  What a wonderful opportunity to see our fair land and lake from the sky in February!