Ship in a glass, playing with money and other weekend tales 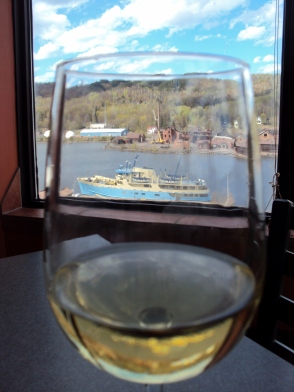 Clearing my throat a bit…going to share some of our weekend fun with you!  Hope you don’t mind.

Barry and I went on a “date” up in Houghton.  We first stopped at the Thirsty Fish bar attached to the North Shore Grill above the Best Western.  He sipped one beer and I sipped one glass of wine.  Later we enjoyed a dinner at Carmelita’s Mexican Restaurant up in Calumet.

Playing with the tip money

I couldn’t help playing with the darn camera.  All it takes is one glass of wine and I’m talking wild & crazy about blogging and photography.  Poor Barry is a saint.  He actually listens.  He actually cheers me on as I take photos through wine glasses at the Isle Royale Ranger.  He grins as I line up the dollar bills for the waiter and photograph them.

The Quincy Smelter (and Mount Ripley ski hill) greet us out the window.  The National Park Service is fixing up the old copper smelter.  Some day we’ll tour the grounds and oooh and ahhhh over the old site.  In the meantime, I babbled to Barry about the day when his boat will finally run and we can drive close to photograph the old buildings.  Probably next summer.  Hopefully next summer.  If his boat ever gets fixed and sea-worthy.

We also picked up his new bass amp at Good Times Music store in Houghton.  We shopped for our organic vegetables at the Keweenaw Co-op.  Stopped at Wal-Mart.

And–you will never believe this–we lost one another.  I used to have nightmares about losing the kids in Wal-Mart, but never the husband.  Yet it happened.  He headed off to buy Veggie Burgers in the freezer section and I looped over toward the toilet paper.  “See you later!” we blithely called.

Five minutes passed.  Ten minutes.  Fifteen minutes. No sign of husband.  Where….?  I cruised the aisles and headed over toward the Mother’s Day cards and shampoos and green onion seeds.  No friggin’ husband.

How could you lose a guy in Wal-Mart?

I mean, seriously.  How could you lose somebody in Wal-Mart?

Finally, down one of the grocery aisles, I spotted the Lost Fella.  (Um, he would have called ME the lost Fella.)  He was walking and talking animatedly with our friend, Anni.

Anni, the dear, had read this blog during the week I was in California!  She was also in that western state with her daughter.  It’s a small world.  It is indeed.

The last picture in this series was taken at Roland Lake near Skanee.  I stopped by work at the Arvon School on Saturday morning for about an hour.  It was like grand central station there.  We’re preparing for our centennial (100 years!) and we’re painting the interior before our big celebration.

I had a coffee date with a former principal from the school at noon, with an hour to wait until our java-sipping.  She intended to show me how to use an aeropress coffee maker.  I couldn’t wait to visit her, but thought it polite to wait until the appropriate hour.

Stopped by Roland Lake and wandered along the shore, admiring the spring scenery.  Marveled at all the instructions on the dock.

It’s been a good weekend.  Hope you all enjoyed hearing about it!

I live in the middle of the woods in Michigan's Upper Peninsula. Next to Lake Superior's cold shores. I love to blog.
View all posts by Kathy →
This entry was posted in Uncategorized and tagged Baraga County, family, Houghton, Isle Royale Ranger, life, Michigan, personal, photography, Quincy Smelter, Skanee, Upper Peninsula, weekend. Bookmark the permalink.

19 Responses to Ship in a glass, playing with money and other weekend tales