When the comments are as good (or better) than the blog…

The cell rang as I drove back home Wednesday morning.  It was Barry.

It was about 7 a.m. and I had a seven hour drive ahead.  I tried to match his enthusiasm.

“You know,” he said.  “I spent a long time last night reading the comments on your blog.  There were some GOOD comments.  People really wrote good things.  Memories.  Told some great stories.  I was so impressed with the comments.  Hey, did you happen to read my comment this morning before you left?”

Umm, no.  What did you say, Barry?  (And it always looks suspiciously like I’m the one commenting when he posts a comment because the “Kathy” pine cone icon pops up.  You have to read carefully to see that it’s not me.  But I’m always so thrilled that he’s commenting that it doesn’t matter.)

Here was the last part of his comment:  PS–We need cucumber and squash plants for the garden, and Impatiens for the hanging baskets, if you come across some on the way home, and–can you say this on a respectable blog?–toilet paper!

It’s good to know this is a respectable blog, Barry.  And the toilet paper was actually sitting on the floor down in the basement.  Not its usual place, mind you.  You had to look down.

But let’s talk more about comments.  Years ago, when I was a Blogging Baby, a blogger friend named Aley said, “Whenever someone comments on my blog, I imagine that they are in my living room.  I answer them like we’re having a conversation.”

Those words sounded good to me.  I try to live up to Aley’s standards.  Anyone who comments on these blogs gets some chatty conversation in response.  Even if they never re-appear to read the response, I am chatting away with them.  In the recesses of this mind, we’re having an in-depth conversation, deepening relationship, becoming friends, developing community.

I love comments.  I adore all of you who comment.  And the rest of you who don’t comment…I would love you, too, if I knew who you were.  One wild & crazy day last week the blog received 247 hits.  People stopped by to read about  the church, the steeple, the baby bunny & the merry-go-round.  Lots of people, apparently.

About 17-18 people left a comment.   Great comments.  Magnificent comments.  People have been commenting left and right all week during my trip downstate.  (Except for my blog talking to my dead grandparents…I think everybody raised their eyebrows and took off in the other direction when they saw that!)

I want to thank you commenters for adding thoughtful, funny, wonderful snippets and stories and memories and ideas and agreements and–what the heck–sometimes even mild disagreements.  Although none last week.

You guys are the BEST!  I would send you all a bouquet of flowers if possible.  Consider yourselves the recipients of virtual flowers.

(This seems a good place to interject a comment that I got on last year’s outdoor blog two days ago.  It was the blog about Why did the porcupine cross the road?  Here was the comment:  The porcupine crossed the road because you’re all stupid.  Needless to say, I deleted that one.  Malicious and mean-spirited comments get tossed in the virtual wastebasket.  However, in the last 18 months, I have probably only received three to four mean comments.  And one guy came back to apologize a month later!) 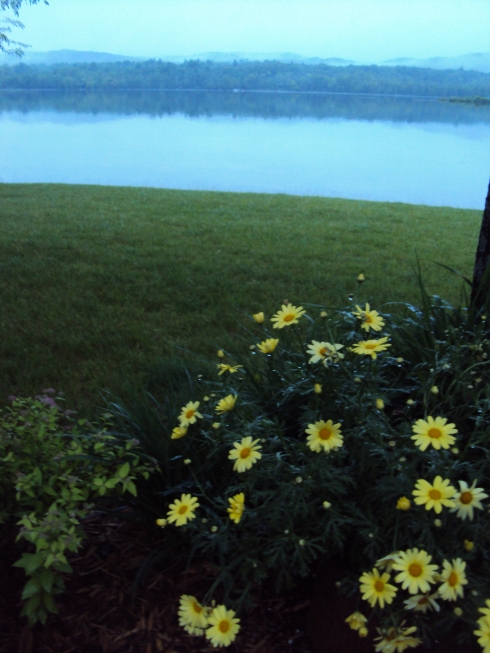 Sometimes I wonder what propels a person to leave a comment–and others to pass through without a word.  There’s a part of me that would like a comment from EVERY ONE who reads, please.  Thank you.

Another part says, “Don’t be silly.  You’d be overwhelmed.  Just be appreciative of who does comment.  For goodness sakes, Kathy.  Get a grip.  You can’t be best friends with everyone in the Universe.”

Comments, at their best, ripple outward.  I know I read what the commenters offer and learn something new almost every single day.

And the comments make me feel connected to a big wide incredibly versatile world.  Instead of being isolated in the middle of the Big Woods…I am connected by an invisible web to the rest of the planet.

How cool is that?

I live in the middle of the woods in Michigan's Upper Peninsula. Next to Lake Superior's cold shores. I love to blog.
View all posts by Kathy →
This entry was posted in Uncategorized and tagged blogging, comments, friendship, life, musings, on-line community, Opinion, personal, stories, thoughts, Upper Peninsula, WordPress. Bookmark the permalink.