The dangers of thinking too much about writing a blog

Do you want to know my blogging advice to you?  (As if you don’t know already after reading the headline!)

Don’t think too much.

Don’t think too much before you write your blog.  In some instances, it’s better not to think at all.

When I started blogging back in the 1800’s–no, no, that was eighteen months ago–I thought about The Blogging Subject all day.  What to write about, what to write about…  Mulled over the topic.  Turned it sideways and peered at it in the mind’s eye.  Pondered.  Thought, thought, thought.  A good portion of the day was spent mulling over Blogging.

Until one day I realized–I can’t live like this.  NO MORE THINKING!

And from that moment on was born:  The Spontaneous Blog.  OK, not every blog is totally 100% spontaneous.  (This one happens to be.  I had no idea what was coming out until…until…well there is still no idea what is coming out.  Let’s wait and see!)

Sometimes a couple of sentences or a fragment of an idea hatches in the early morning.  Or maybe it hatched two days ago.  But I refuse to think about it beyond maybe two or six sentences.  Because…then the Mind starts churning it around and trying to figure out how to say it better and what to say and what’s grammatically correct… NO!

Sometimes it’s best just to sit down and start sharing. 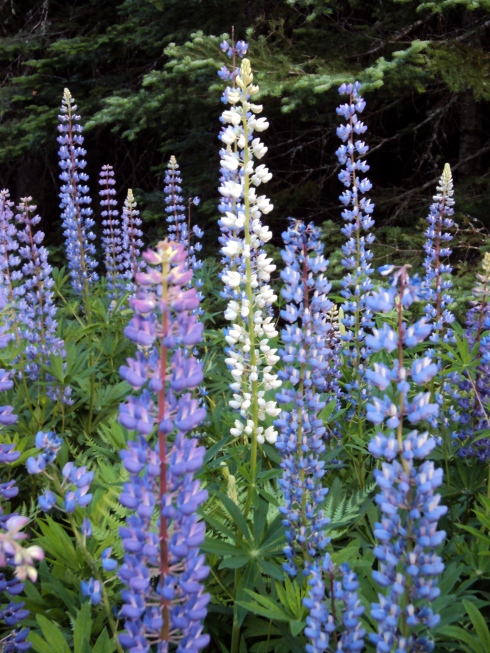 Let the little snake go into its wildflower home.

Let the pictures determine what you’re going to talk about.  Let the pictures tell a story.  The pictures might keep referring to the person who looks like she’s writing a blog, but really it’s the pictures who are talking.  They’re crafting their subject–sometimes craftily.  Sometimes funny.  Sometimes dead serious.  But there’s an open space where you never know what’s coming out.

That’s when blogging gets fun.  Because there’s not a Mind that is supervising and orchestrating and fretting and revising.  There are just words flowing out helter-skelter from the typist’s fingers and sometimes laughter too.

How do you DO that, you wonder?

Bambi sighting from the bathroom window.

You sit down.  You still your mind.  You post your pictures.  And then you start typing.  You watch the words form without even thinking about what you’re going to say.

Perhaps some of you have heard of a group called Diving Deeper?  It was once part of a community website called Gaia.com which is now defunct.  The founder, Sandra Jensen, teaches this technique of sitting before a blank piece of paper (OK, a computer screen will do) and simply writing.

There are a few guidelines which assist the writer and I thoroughly recommend for some of you to check out the current site:  http://divingdeeper.ning.com/

You will soon see that this practice of fearlessly facing the empty page and allowing yourself to dive in fully can yield great results.  Although I don’t utilize all the Diving Deeper techniques on my blog, I love the idea that it’s possible to write without our conscious thinking mind leading the way.  We can surrender and allow something deeper to have its say.

Mama and baby wander into the woods

Before I quit typing for the evening:  back to the snake photos.  Barry and I walked on the road last night.  We saw a snake paused in the middle of the road.  Barry took the winning photograph (above).  He actually got on his belly next to the snake to come up with this shot!  Didn’t he do a great job?

And then…and then…he picked up Mr. Garter Snake and held it!   And then–you are thinking that Mr. Snake bit him, aren’t you?  Oh no.  It was worse than that.  It– (how does one put this politely in a blog?  C’mon, thoughts, where are you when we need you?) –It peed and poohed all over his hands.  Yes.  It did the dirty.

It was very challenging for Barry to continue walking with me up the road, let me tell you.  He wiped his hands on every damp leaf in the nearby surroundings while exclaiming quite loudly against the poor snake.

Simplicity of being just what it is.

As for the deer photos….remember my desire to see a curled up baby fawn?  Well, it is definitely too late.  The fawns are now prancing and dancing and frolicking.  I didn’t get the greatest shot (through the bathroom window and everything) but it does kind of look like a modern art painting, don’t you think?

Ooops, I didn’t mean to suggest that anyone start thinking.  OK, you can think again. But just remember the dangers of thinking too much about writing.  Just dive in and let the fingers tell whatever story they’re aiming to tell.  I’m here to tell you that they usually do a good job.

P.S.  All you people who write a blog teaching and educating folks–don’t lynch me!  Sometimes it’s OK to think.  Some blogs lend themselves to thinking.  It’s OK.  Just wanted to alert everyone to the dangers which some time crop up when you try to think too much about writing.