The Solstice and the Creature

The amazement of sunlight at the solstice

Hello, dear reader!  Did you notice I skipped a day?

And then had to take my own advice from the last blog.  Because the Mind started to whine (oh haven’t we heard this before??)  “There’s nothing to say, nothing to write about!”  But since I don’t believe this particular slice of mind (Yes, I still believe other slices of mind) this blog is born despite all odds.

We shall write about The Solstice and the Creature.

Let there be shadow and light on this longest day

The Solstice, as many of you know, is the Longest Day of the Year.  The longest day of sunlight shining uponst us all.  OK, some of us suffer with clouds or rain or tornados or monsoons.  But behind all those events, the sun still insists it’s the boss on June 21st. 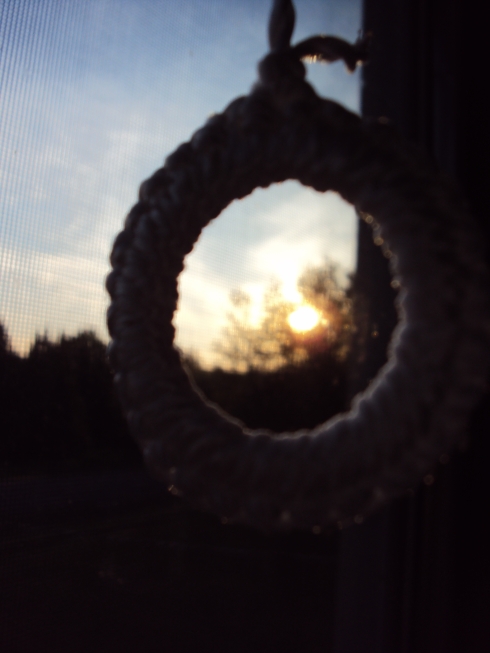 Ring around the Solstice rising sun!

This morning I was at work at the school.  Working.  Honest.  Except, on a sashay through the library (it couldn’t have been more than three minutes, honest), I noticed shadows and light!  Had to go root in my purse for the camera.  Don’t you love the way the shadows and light play on that game?  I do. 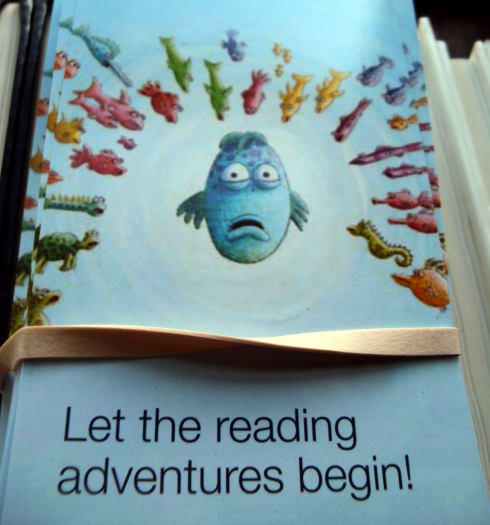 While I had the camera in the library, it was now paramount to take a picture of the sun shining through a ring in the curtain holder.  The sun, for an instant, was captured!  Yes!

And down below lay a flyer which insisted, “Let the reading adventures begin!”  I snapped its photo, as well.

The latest reading adventure has my heart going pitter-patter and the fingers dialing the L’Anse Library trying to get the second book in the trilogy.  It’s called “The Fields”.

The first book, which I devoured like manna, was called “The Trees.”  Oh.  Yes.   It is by Conrad Richter and it’s situated at the end of the eighteenth century in the land west of the Alleghenies and north of the Ohio River.

The author talks in old-time lingo, and by gosh, by golly, by the end of the book you’re going around saying things like “I tole you!” and “It put me in mind of the playparty rations…” even though you have no idea what “playparty rations” might be.

Gosh, how I loved this book!  It came to me via my stop at Dog Ears Books in Northport nary on a week ago.  (Tee hee, you see how this old-time language takes over after a good read.)

I was askin’ Pamela to recommend a good book when an artist-sort with blond hair began to wax poetically about The Trees.  She said almost every one in their book club liked it.  If almost everyone in a book club likes a book, it’s a miracle.  (Our book club can never get a quorum on a book we like.  Well, hardly ever.)

For all you adventuresome readers.

One of the fascinating parts about this book are the trees themselves.  They hang thick and dark and heavy and lonely, swamping the early settlers in their unbroken forest world.  The curtain of heavy trees may have even killed one of the characters…but we won’t go there.  Oh how I understand!

Last year, when I wrote the 365 day outdoor blog, I wrote one blog which articulated some of the challenges of living amidst a forest of trees.  It was called Horizon Envy and it was one of my favorite blogs from last year.  My sociologist son even suggested a possible sociological study of this phenomenon. 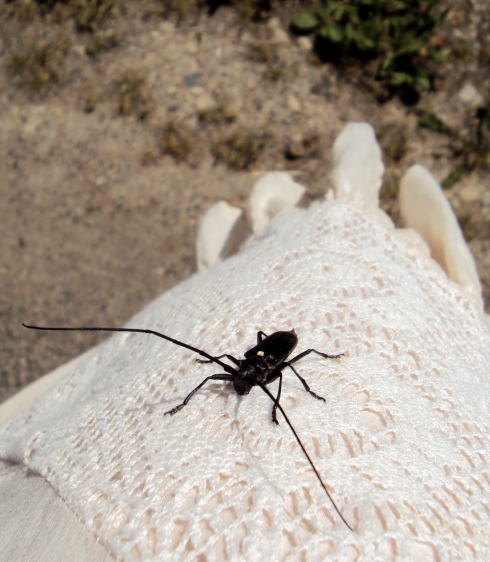 But watch out when you start reading. You never know who will decide to join you.

Anyway, I am panting to get the next book.  The library lady said she would check and see if it’s possible to order interlibrary loan books during the summertime.  (Apparently the libraries aren’t happily passing around books when the schools close due to high postage costs.  Sigh.)  Might have to gander toward another bookstore!

As for the Creature–you were waiting to hear about the creature, weren’t you?  Did you see It lingering on my skirt in the above photo?  It decided It wanted to roost on the reader earlier today.  Any one know the name of this long antennaed creature?

And while we’re talking books, any of you enjoying your reads these a days?  (Oh goodness.  We have to get back to talkin’ normal soon.  We hafta.)

Enjoy the Solstice, Everyone!

I live in the middle of the woods in Michigan's Upper Peninsula. Next to Lake Superior's cold shores. I love to blog.
View all posts by Kathy →
This entry was posted in Uncategorized and tagged blogging, Conrad Richter, Dog Ears Books, Horizon Envy, humor, library, life, musings, nature, outdoors, personal, photography, reading, Solstice, The Fields, The Trees, thoughts, Upper Peninsula. Bookmark the permalink.

33 Responses to The Solstice and the Creature