One round railroad window

Spending her life on the trains 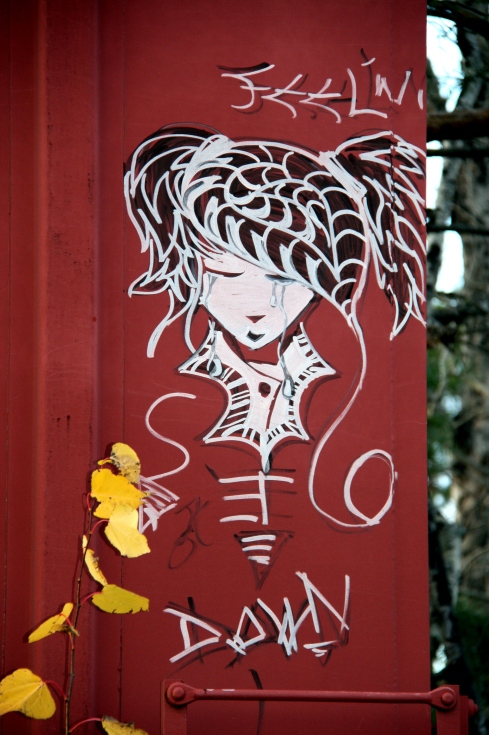 The art of Dawn

The fast rails they took ‘er

"Talk to the hand"

to get home again.

May you enjoy the railroad photos, dear reader.  May you interpret them as you will.

To interrupt the purity of the photos which tell their story no matter what the blogger attempts to share.

The sun threatened to hide behind low clouds.

We had one half hour to take railway photos.

Kathy stepped from the car and ran joyously toward the train.

She immediately stepped in a puddle of water.

Her left shoe soaked in six inches of puddle.  She frowned.  It was 42 degrees.  She had a long night at the football game.  How could she have stepped in a puddle of water?

She smiled gleefully nonetheless.  Who cared when one could take train photos?

She ran alongside the train.  She snapped.  This view and that.  Here and there!  But where was the sun?  Wouldn’t it come out, please?

And then it came out.  Her heart soared.  She left her husband listening to National Public Radio and wandered the tracks.  She looked for odd angles.  She looked for the fickle light.  She patted the train’s beauty.  She admired graffiti  (also known as tagging, for you train buffs, you.)

She prompted her driver when to drive and when to stop.  Her heart beat faster than the train.  She felt free.  She felt exquisite.  She felt boundless.

She is still out there on the tracks, somewhere, heading toward the Western Sun.  She knows you are there too.

Listen to that lonesome train whistle.

Where we disembark, no one knows.