I want to live on an island. 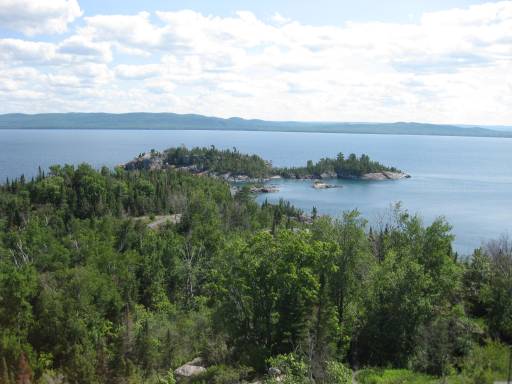 View from the Huron Island Lighthouse

Let’s be honest.  Part of me wants to live on an island.  The other parts are completely satisfied living in our Little House in the Big Woods in Michigan’s Upper Peninsula.

The part that wants to live on an island thrilled to read an article in Lake Superior Magazine last week.  The article “Wintering on the Island” by Madelaine Karwoski shares her life on Madeline Island, Wisconsin.  This island, propped in Lake Superior just off Bayfield, is 14 miles long and four miles across.  It hosts about 300 or so year-long residents.

What a great story Madelaine shared!  I wish I could provide a link so everyone could read it.  She starts by saying “If you live on Madeline Island and you forgot to get fresh mushrooms at the store, fetching that ingredient could cost $37–counting in the full cost of a round trip ferry to the mainfland.  Plus figure it will take a couple of hours if ice slows the crossing…”

Gazing out at the Huron Islands from shore

She’s lived on the island since January, 2007 when she moved north from St. Paul, Minnesota.  She shares about the community on the island–the Mission Hill Coffee shop (which is also Information Central in winter), the ferry liner, the local theater group (the Lake Affected Players!) the local food shelf which is never locked, the choir, the magical Christmas Pageant, and the auspicious date when the ice freezes between the island and the mainland and vehicles can traverse the ice road.

Doesn’t this sound ideal?  Doesn’t this sound like The Life?  To live on an island…it contains a grand mystique.  What is it about this thought that intrigues us and makes us want to move onto our own secluded island complete with a special community?

Two of my blogging friends live on islands.  If you want to learn more about island life please visit Terrill over at Creative Potager.  She lives on Mayne Island, one of the islands off Vancouver.  I nudged her about life on the island last week.  Here is what she summarized:

We have a little over a 1,000 full-time residents here on Mayne Island. Yes we have a grocery store, a bakery, a gas station with DVDs and a post office open half days Mon – Fri. We have a liquor store, a library and a school. We have a health food store, insurance office, Realtor offices, a clothing store, and a hardware store and more. We have a Health centre with a lab on Tuesday morning. We have volunteer fire and ambulance services. We have over a dozen small food farms. We have a bookstore and a home and garden store. To learn more about Mayne Island please have a look at http://www.mayneisland.com/ and as you scroll down you might even see some images that are familiar. Basically we have everything we need.

Bree lives on Mackinac Island during part of the year–a little island between the Upper and Lower Peninsulas.  There are no motorized vehicles on this island which is a popular summer tourist destination.  Mackinac Island has always stirred the souls of those who imagine living there.  Even though Bree winters in southern Georgia, I suspect that part of her never leaves the island.  Her popular Bree’s Mackinac Island Blog attracts hundreds of folks daily who dream of living on the island.

Island life…it sounds so romantic.  So isolated.  So ideal.

I told Barry last week, “I want to live on an island.”

He stared back at me.

“You do live on an island,” he replied,  “Sort of.  What would be better for you if you lived on an island?”

(Michigan’s Upper Peninsula is almost an island because it is mostly surrounded by water.  But not quite.  Land connects us to Wisconsin.  A bridge connects Michigan and Canada.   It does feel like we live on an island–here in the woods–because we’re completely surrounded by trees.  We’ve carved out a little island among the poplar and maple and spruce.)

Moose and calves on Isle Royale

I contemplated this all week.  What would be different if I lived on an island?  What part of island-life intrigues?

I think it is that I would have to learn to be more self-reliant.  To live even more simply.  To be more thoughtful, more contained.  To live on less–or at least to be able to live on less– until the next trip to the mainland.

Which perhaps is a goal that I could cultivate even more completely in our island on the woods.  Perhaps we wouldn’t need to hop in the car and go out to a restaurant at the first whim.  Or to run to town so easily.  Perhaps growing some deeper roots among the trees might satisfy the part that wants to live on an island.

I want to live on an island. Don't you?

Thanks to my husband, Barry, and Cathy Newland for these photos of Isle Royale and the Huron Islands.

Does anyone else harbor a hidden desire to live on an island?  (It can be just part of you…and you don’t have to move there tomorrow!)

59 Responses to I want to live on an island.