The year our Halloween costumes “petered” out!

(Dear readers, This is what I’ve Put Up With for the last 33 years.  The following is a column which will appear in our local weekly newspaper, the L’Anse Sentinel,  this Wednesday. My husband–who, I must admit–wouldn’t have published this without my permission–has told countless “questionable” family stories over the years.  Once, he reported about our entire family marching in a line “quacking like ducks” from the airport to the State Police post when our rear window was shattered after we returned from a vacation.  Another time he wrote in EXPLICIT detail about our bout with the flu.  It has not always been pretty.

But it’s usually brought a smile to my face.  As for the photograph which accompanies this–would you have let your husband put this in your weekly newspaper?) 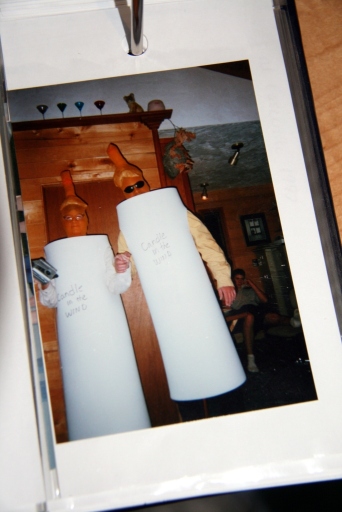 Tomb whom it may concern,

The Drues have successfully navigated another Halloween. This year, by avoiding it entirely, nothing witch could make my dear wife, Kathy, happier. We used to attend very spirited Halloween costume parties. These were semi-pro costume competitions. The “what will I wear?” dread set in for Kathy sometime around mid-August each summer.

Some people live for the creative high of costuming for Oct. 31. They build elaborate, outrageous, top secret Halloween get-ups that take weeks to assemble.

We are not “some people”.

For years I shouldered the burden of outfitting the Drues for the big Halloween ball. I’d reassure my dear wife that I had the perfect idea, that everything would be alright. “Don’t do any thinking—I’ll do that for you!”  I’d tease her.

A couple times I got away with it. One year we arrived as shipwrecked “Flotsam and Jetsam”. We wore old rain suits, ripped-up life preservers, tangles of net and rope and seaweed in our hair. Outside we poured water on each other, and then stumbled into the party. We were a hit.

I went one year as Teddy Kennedy, sporting a navy blue suit, tie askew. I had a white shirt with lipstick on the collar, the shirt tail hanging out and caught in the zipper of my pants. A bumper sticker on my back read, “Put the party back in the Democratic Party!”. It sort of worked.

But the Drues crashed and burned on Halloween, 1997. It was our most embarrassing costume party. As usual, I talked dear wife into going with all the false confidence I could muster. Diana, Princess of Wales, had tragically died that August 31. Just about the only thing you could hear on the radio was Elton John’s tribute, “Candle in the Wind”. The original Marilyn Monroe ballad wouldn’t go away.

“That’s it! We’ll be candles in the wind! It’s genius!” I assured my betrothed.

Using thin white sheets of foam, I made two five-foot tall rolls with arm holes. We bought two cheap yellow flashlights and stood them on our heads, light shining up. Then, and this was the brilliant part, we rolled a leg of panty hose over the flashlights, and over our heads, to hold the whole thing together.

Voila—two glowing candles in the wind. Our daughter still rolls with laughter thinking we looked like a pair of giant, uh, oh, never mind! My wife has yet to forgive me for dragging her to a Halloween party dressed as a giant never mind.

October 31 has always been chilling for me. Fifth grade brought the height of trauma. Proudly dressed in a red and black checkered wool coat, boots, and wielding a woodsman’s axe, I had an acceptable costume and was ready to hit the streets.

A quiet dinnertime phone call pulled the plug on Halloween, 1966, for little lumberjack Barry. My mother was an elementary school teacher. My fifth grade teacher, Mrs. Pelton, was one of Mom’s friends. Surely out of great concern for my future college entrance exam scores, Mrs. Pelton called to tell Mom I was behind on a slew of assignments. Yours truly spent Halloween pouting at the kitchen table with his nose in a math book. Talk about torture when friends arrived on my front porch!

My little brother, Craig, was steeped in a more ghostly Halloween experience when he was six. He looked like a total dork wrapped in the classic white sheet with two eye holes. Mom had done her best but junior wasn’t exactly convincing as Casper the Friendly Ghost.

Excitedly, a bunch of us set out in the dark to canvas the neighborhood for candy. It wasn’t five minutes before Craig stepped in a big, squishy dog doo. It was smeared on his shoes and the hem of his Casper suit. Nothing I could say lessened the horror. Panicked, he ran home crying, his night done before we hit the first front porch.

I did what any caring big brother would do. At each house I calmly told them I needed two candies because my little brother stepped in dog doo and had to go home. It worked every time, probably because no one could have made that up!

Later that night bro and I spread the candy on the floor and split the loot. We survived, our dignity barely intact, but the die was cast for a lifetime of Halloween horrors!

(Thanks for the memories, Barry…I think…  Love, Kathy, your Candle in the Wind.)

I live in the middle of the woods in Michigan's Upper Peninsula. Next to Lake Superior's cold shores. I love to blog.
View all posts by Kathy →
This entry was posted in Uncategorized and tagged Halloween, humor, L'Anse Sentinel, life, memories, thoughts. Bookmark the permalink.

43 Responses to The year our Halloween costumes “petered” out!