MOOSE! See the MOOSE? Do you see it? DO you? 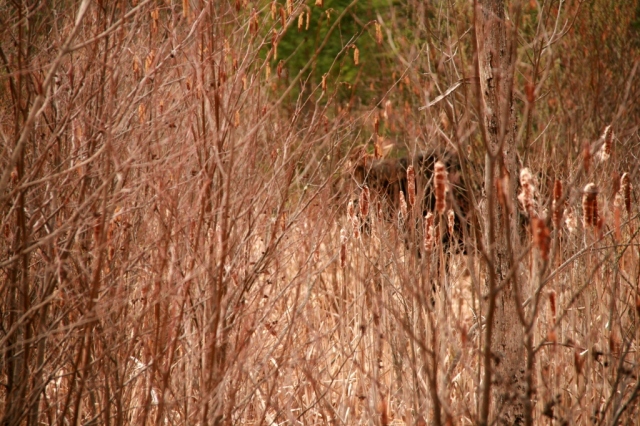 Isn't it beautiful? Isn't it wonderful when you can spot a moose beside the road?

All joking aside, our most famous local celebrity is–a Moose.

It can be seen munching swamp-grass on the Skanee Road, to the great delight of community members driving between L’Anse and Skanee or Aura.

This same moose–or a distant relative–lounged in the same swamp last spring, entertaining drivers and camera buffs alike.  Usually it appeared at dusk, resulting in an entourage of cars pulled over on the side of the road.

Often photographers dash out of their cars running toward the moose who watches the antics of humans with cool detachment.

(Some of us mutter that one of these days the moose will decide to charge some of us crazy people, and then the Michigan Department of Natural Resources might have to shoot the noble creature for acting as a public nuisance…although we pray that will never happen.)

We know not the sex of this particular moose, because sex can only be determined (at long-distant sightings particularly) by a large rack of antlers.  Since it’s not yet antler-season, the bulls and cows look the same.

You may want to read this link about Moose Facts.  It says that moose are not usually aggressive, except when hungry, tired or harassed by people, dogs and traffic.

You may also want to stop by this blog Two moose sightings in one week written last spring in which my friend, Lori, took some fairly close-up photos of roadside moose.  It explains a little about the history of moose in Michigan’s Upper Peninsula.  Or click this Michigan DNR Moose Project Fact page.

But let’s return to our exciting moose spotting yesterday. 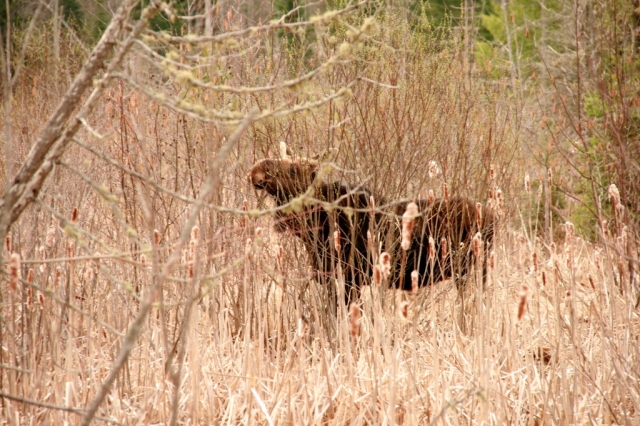 A much better view, don't you think?

Last spring I saw the most magnificent bull in the swamp, complete with a large rack.  Up close and personal. No other cars around.  However, this sighting occurred during one of my anti-camera phases.  After two years of carrying the camera everywhere for your blogging pleasure, I decided to quit photography for a week or so.  You can imagine the eye-rolling that accompanied the spotting of the elusive moose.  Figures.  Never leave your camera at home.

Last week the community got excited again.  Moose spottings!  The moose was back munching  in the swamp.  Somebody put up a wooden sign:  Moose Crossing.  Moose-sighting fever is high.  C’mon, Moose, show us yourself!  We want to see you, take your picture, share it with the moose-less world.  Please?

On Friday night, after our fish fry with John and Jenny Kuttenberg at the Huron Bay Tavern, we advised them to keep their eyes peeled for moose on their way home, especially near the swamp.  John emailed back excitedly:  “The moose was there!”  Hurray–another sighting!

Yesterday, I motored to town.  No moose at the crossing.

Seven cars were pulled over.

I grabbed the Canon Rebel with long zoom-lens and jumped out of the car faster than you could say, “Bullwinkle!”

Ran to the side of the road–I wasn’t harassing the moose, honest–and began snapping.

Twelve other passers-by snapped photos, as well, although mostly on little point-and-shoot cameras and cell phones.

I snapped my shot with the powerful Ms. Rebel.

You can see, by the first photo, the stunning results. 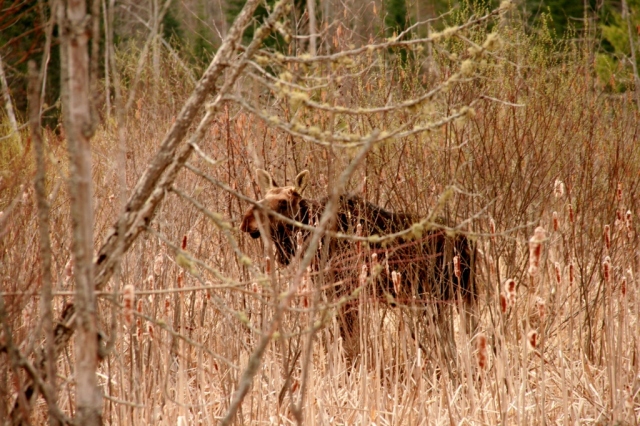 Thank you, people.  I headed over to their vantage point and yes, yes, you can see the moose a tiny bit better.

“Kathy, are there nubs on the moose?” an older woman called from a truck.  (Who is she?  Why is she calling me by name?)

I cannot determine nubs or lack thereof.  Perhaps some of you readers can discern.  The moose yawned and turned away.

“Kathy, can you email us pictures?” asked at least two people. “Email them to Elaine.”

“But I don’t have Elaine’s email address–” I said, but off everyone left in their cars, the moose now too far away to photograph, the excitement abated.

Nary a car remained alongside the road.  The swamp now looked peaceful, deserted… until the next time the moose decides to munch next to the highway.  It’s as exciting as a circus.  But don’t run TOWARD the moose, people. Let’s stay on the road and let it wonder about the crazy people.

I live in the middle of the woods in Michigan's Upper Peninsula. Next to Lake Superior's cold shores. I love to blog.
View all posts by Kathy →
This entry was posted in Uncategorized and tagged humor, L'Anse, moose, nature, photography, thoughts, Upper Peninsula, wild animals. Bookmark the permalink.

34 Responses to MOOSE! See the MOOSE? Do you see it? DO you?