Ditto what the Lorax said. 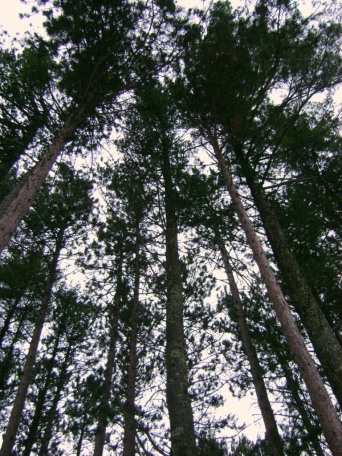 I speak for the trees. For the woods. For the forests.

Does everyone remember what the Lorax proclaimed in the famous Dr. Seuss book?

He solemnly said, “I am the Lorax,  I speak for the trees.”

This blog is ditto what the Lorax said so mightily.

Today I am joining hands with the Lorax and bravely echoing his sincerity:  I am Kathy and I speak for the trees.

I’ve told you that we live like Laura Wilder Ingalls and Pa and Ma and Mary and Baby Carrie in a “Little House in the Big Woods”.

Even though the Ingalls lived down south in Wisconsin back in the 1800’s and the Drues moved way up north to Michigan’s Upper Peninsula in the late 1970’s, you’re probably wondering whether the woods where Laura played looks similar to the woods where Kathy wanders.

We are gathered together today to discuss the woods, the natural homeland of trees.  I am aiming to sketch a picture for you of what it’s like to live in the woods of Michigan’s UP where there are reportedly 8.7 million forested acres.  Pull up your wooden chair by your wooden computer desk atop your wooden floor and listen carefully.

Circle of fallen brush in winter

Even though I’m not a scientist, I can share this much with confidence:  today’s woods exist in tandem with their history.  And the history of the forest is tightly interwoven with human intervention.  This is the most pertinent fact:  Most of the woods in the United States in the twenty-first century have been previously logged.

You may hear the word “woods” and picture old-growth hemlock, cedar, and maple trees so big you can hold hands with your six best friends and wrap yourself around one big beautiful tree in a gigantic tree hug.

No, my gentle tree-loving reader, you won’t find many of these giants left in the woods around here.  These old-growth trees are almost non-existent, although sometimes you can luckily find one and hug to your heart’s desire.  Sometimes plots of land have been protected and you can tiptoe softly among huge trees singing pioneer songs.  But this is a rare occurrence. 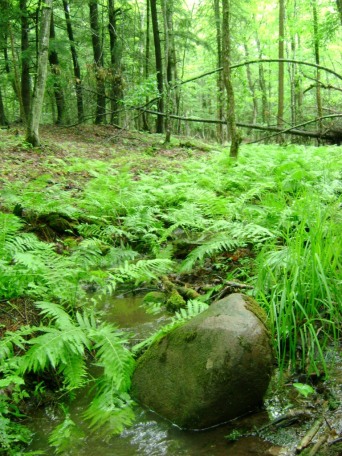 Most of our land has been logged to provide your wooden furniture, books and newspapers not once, but sometimes two or three or more times.  The Upper Peninsula is filled with trees, yes, it’s true, but there are many young saplings, up-and-coming arboreals, teenage trees.  They are young whippersnappers dancing in the wind toward distant skies.

Swamp-woods. Hear the waterfall trilling of the red-winged blackbird?

Would you like to hear the history of our 23 acres of woods?  In the late 1800’s  rugged loggers sawed giant white pine and cedar trees, straining and sweating with their hand saws, until the giants plummeted to the earth with a resounding thud.  The land between Keweenaw and Huron Bays witnessed tree after tree after tree fall.

Many of these huge trees were probably floated onto the bays headed to local sawmills and ships to distant ports.  Many of these softwoods helped rebuild the city of Chicago after Mrs. O’Leary’s cow kicked the lantern and fire razed through much of the burgeoning metropolis.   Other Michigan and Wisconsin towns including our village of L’Anse in 1896, also burned and were rebuilt.

Henry Ford later looked at our remaining hardwood trees–primarily sugar maple– and envisioned fancy wooden dashboards and body framework in his new-fangled cars.  Ka-boom!  Along came a second wave of logging, which often left some areas clear-cut and littered with flammable slash.

The land around Aura (where we live) lay in tangled brush, drying dead leaves, and stumps.  One fine warm day in the late 1920’s a fire was sparked by a passing locomotive and spread through the logging melee.  Hundreds of acres burned, including much of Point Abbaye which separates Keweenaw and Huron Bays.

The denuded burned soil washed down steep grades into Huron Bay, filling already-shallow end of the bay with sediment.  This robbed our soil of nutrients for the next generation of timber.

After a fire in the woods...

Huge deep ravines formed as the soil swelled toward the bay.  Ravines cut periodically across the land, an undulated up and down hike in this modern new century, the result of human tinkering almost a hundred years ago.  The ravines are still there.  We overlook one from our deck.

What happened after the fire?  Seedlings sprouted.  But not the old-growth giants of yesteryear.  In the life of a forest, first generation trees arrive first, like sentinels, to assist the depleted or immature soil.  Even-age trees all sprout at the same time and grow quickly in full sunlight.  Trees like poplar arrive to grow tall, fast, and large.

Poplar trees grow up quickly (think 40-150 years above ground, although their root system can live much longer) and then crash back to the soil.  The rotting trees decompose leisurely, nourishing the depleted earth.  The increasingly nourished soil then favors seedlings like uneven-aged soft maple trees which grow a tad more slowly than poplars.  They are tolerant to shade, with the original canopy of poplar often above them, but they are certainly not the old-growth giants of our Pioneer brethren. 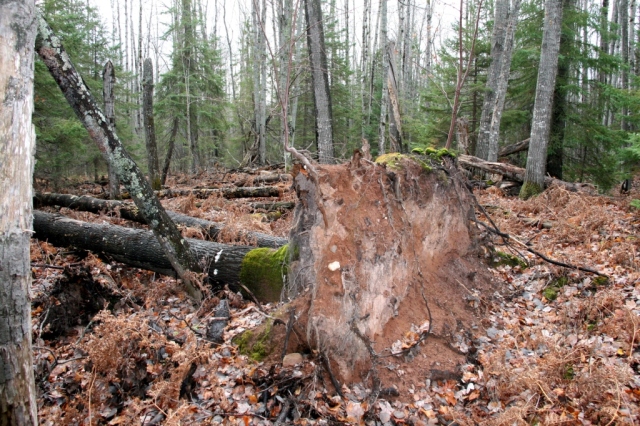 Wind storms crash tall trees to the ground, sometimes even pulling up the stump and root system

The forest completes a cycle in its ever-changing existence.  Everything in the woods from the smallest creature to the tallest tree lives in interdependence.  It’s a cosmic dance.  One logging episode disturbs the equilibrium, taking years to re-establish the momentum.

You may also be thinking that if you’ve seen one woods, you’ve seen ’em all.  You may think “woods” is a homogenous word.  No, dear reader, I am here to relate that the forest is as diverse as a human population–perhaps even more so.

Tract of woods in winter

There are all kinds of forest.  There are tracts of spruce, hemlock, white pine.  (Think green.  Think evergreens.  Think Christmas trees.) There are cedar swamps so dark and murky and moss-covered that you breathe historic reverence.  There are birch forests with white-barked trees gleaming in moonlight.  Aspen or poplar forests.  Maple, both hard and soft.  Oak forests. So many forests I can’t name ’em all without writing until tomorrow morning.

Human in woods. (OK, it looks like my daughter.)

And–as you can imagine–there are woods which contain all sorts of trees, intermingled.  The oak tree sheltering the baby pine.  The hard maple racing the poplar to the clouds.  The hemlock where a fawn lies motionless in late May, waiting for Mama Doe’s return.

If you walked between here and Marquette, a town maybe 80 miles south and east, you would traverse all kinds of woods.  You would meet millions of trees.  Old-growth miracles, sapling tracts with baby trees growing so close together that they slap your face, slap, slap, slap, worse than mosquitoes.  I know because I’ve walked in them.

You’d wander through swamps so impenetrable you couldn’t easily find your way out before the 4th of July.  You would find manageable sections where your feet cheerfully thought they were in Central Park, New York City, so nicely manicured you could picnic in the wide-open spaces between trees.

The woods are so diverse that you could study the flora and fauna for years upon botanical years and never completely fathom the interconnected nature of all the creatures and trees.

As I’ve said before, I am a tree hugger AND a tree killer.  We burn wood in our wood stove.  We use wood furniture and read books and magazines.

I like to think that we’re like the Native Americans who honored every creature’s life as they pulled back their bow string.  They murmured prayers of thanksgiving to the deer, the sturgeon, the great black bear, the swimming otter.  They attempted to utilize every part of the creature.  They often gave back to the earth by laying a pinch of sacred tobacco next to their fallen comrade.

The elegant companionship of birch

“Thank you for giving your life, so that we may eat,” a hunter might converse with a fallen partridge.

I try to remember to give thanks to the fallen tree brothers and sisters, as well.

“Thank you for giving your bodies so that we might be warm,” I might say to the maple or oak before our wood splitter fragments the logs into manageable chunks.

Too often I forget, and remember, and forget again.

The woods are a living entity, a sacred dance of trees, a mix of bodies crashing to the earth after wind storms and steady upward growth toward sun.  When their bodies fall and rot into earth, they nurture and heal and create anew.

Thank you for pausing to learn a little more about our Little House in the Big Woods.  Do you have any burning questions about the woods?  Have you ever lived in a forest?  Do you have any woods-stories to share?

What is your name and do you speak for the trees, too?

Do you speak for the trees, too?

I live in the middle of the woods in Michigan's Upper Peninsula. Next to Lake Superior's cold shores. I love to blog.
View all posts by Kathy →
This entry was posted in Uncategorized and tagged Arbor Day, Dr. Seuss, forest, life, Native American, nature, The Lorax, thoughts, trees, Upper Peninsula, woods, writing. Bookmark the permalink.

117 Responses to Ditto what the Lorax said.