Yesterday  in Wal-Mart, near the pickles, I nearly tripped over a Native American elder driving a cart.  Years ago, he led sweat lodges in our area in which I participated.  We prayed together, many of us in the dark tarped wigwam, singing ancient Anishinabe (Ojibway) songs, chanting over and over again as sweat dripped down our brows, our hearts open.

Yes, many full moons have risen and dived back into inky blackness since we sweated together.  Many maple syrup harvests have passed.

“I’m doing my monthly grocery shopping,” he explained as we exchanged pleasantries.  It looks like he can’t walk long distances any more.

We parted easily, flowing our separate ways once again.  I wonder if he’ll dance at the Pow Wow arena in late July.  If his legs will allow a round in the sacred arena, the feet pounding the Mother Earth like drum sticks, the heart of the earth beating like the drums.

I wish I’d asked him about his legs.  About his life.  But we’d never had an easy camaraderie; the questions fizzled as I pondered our past.

On the way home from Houghton, I noticed the white tepee at the Baraga State Park.   Paused to snap a photo through the trees.  For $30 a night, you can rent this 16-foot round tepee called the Kitchigamee Tepee. 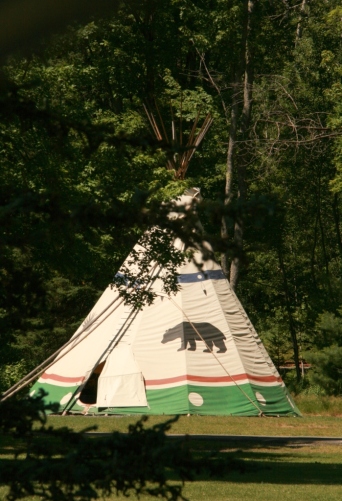 Tepee at the Baraga State Park

The Michigan DNR website for the Baraga State Park explains:  “Kitchigami” meaning “great water” or “great lake” is a name taken from the Ojibway Language Dictionary written by Bishop Frederic Baraga. This dwelling offers visitors a chance to learn about and experience the Ojibwa culture and traditions. The tepee is decorated with a pattern called “Big Lakes” in honor of “Otchipwe Kitchigami” or Lake Superior in the Ojibway language.

I’ve never slept in the tepee at the Baraga State Park.

But, years ago, I slept in a tepee. Perhaps one night; perhaps two.  It was an amazing experience.

Before sharing this tale, please be advised that the Anishinabe who lived along the shores of the Great Lakes did not utilize tepees.  They slept in wigwams, domed curved structures made of green saplings.  The wigwams were usually covered with birchbark.

Today’s modern-day sweat lodges are constructed like wigwams, except the covering usually consists of blankets or tarps.

Tepees (also called tipis or teepees) were utilized by the Plains Indians west of Lake Superior land.  They are a conical dwelling made of animal skins and wooden poles.  They could be disassembled and packed away quickly when the tribe moved to new locations.  Today’s tepees (which you can buy from companies such as Colorado Yurt Company) are usually covered with canvas, rather than animal skins.

Bald eagle, also known as Migesi by the Anishinabe, sitting by telephone wire.

I stayed twice in a tepee owned by my friend, Barbara, about twenty years ago. Both nights were fascinating experiences.

This morning I called Barbara, hoping she’d provide some factual stories about our tepee sojourn.  I remember it as exciting.  But why?  I knew she’d fill in the memory gaps.  How I admire folks with long memories!

On that auspicious night, oh so many years ago, perhaps in the 1980’s, we lit a fire in the center of her tepee, attempting to make the smoke behave and waft upwards toward the upper poles, and out into the inky night.  Barbara reached for wood from her woodpile when–oh my–readers, were you expecting another snake story?–out wiggled a small garter snake.

OK, I must admit, this is NOT Barbara’s tepee snake. This is Kathy’s basement snake. But you get the idea, right?

Barbara was not pleased.  She remembers screaming for her nearby son to help.  Her son picked up the snake and took it far, far away.  Or so he claimed.

Barbara said I was as cool as a cucumber, completely nonplussed.  She said she would have left that tepee without spending a night.  Not yours truly.

Yours truly fell asleep zipped securely in her green sleeping bag, but Barbara lay wide-eyed and awake for hours underneath buffalo robes after she tended the fire.  She rolled over, attempted to sleep, but felt something under the furry robes.

She rolled over and heard a sound.  ch-ch-ch…

The sun shimmered above the horizon.

We rose.  I unzipped my sleeping bag.

Barbara hoisted herself up, throwing aside the heavy buffalo robe, shaking it, convinced of her late-night silliness.

When suddenly…oh, reader, are you ready for this?

Are you really ready for this tepee tale?

Out leapt a FLYING SQUIRREL from beneath her buffalo robes!

She remembers thinking, “At least it was a creature with FUR!”

He immediately ran to the center pole in the tepee.

She wondered, “How are we ever going to get him down?”

He looked down–I’m sure he must have looked down–but perhaps he didn’t–because why would be care about the terrified human quavering beneath him on the grass floor of the tepee?–and took flight, yes, straight up, straight east, a majestic dive toward the woods, a leap into the trees, far away from human abodes.

Would you like to sleep with a flying squirrel?

I live in the middle of the woods in Michigan's Upper Peninsula. Next to Lake Superior's cold shores. I love to blog.
View all posts by Kathy →
This entry was posted in Uncategorized and tagged Anishinabe, Baraga State Park, life, memories, Native American, nature, Ojibway, person, tepee, thoughts, wigwam, writing. Bookmark the permalink.

69 Responses to Would you like to sleep in a tepee?