With tears streaming down my face…

She ignited a memory this morning, a very cherished memory of our children’s elementary years.

As many of you know, we live in a small township with about 460 residents (down twenty folks since the 2000 census.)  Our elementary students attend a two-room public school.  The student count fluctuates over the years.  Back in the 1980’s and 90’s when our kids attended the count averaged about 28.  One year, for a very short time, we topped out at 41 students.  These days we teach between five and fifteen girls and boys.

Our two attended Arvon Township School where their mama (me!) had the fancy title of Business Manager.  That meant I did the books, paid the handful of employees and filled out countless state reports.  (As many of you know, I am still in this part-time position all these years later.)

One of the highlights of the school year for our students is a magnificent Christmas program where moms and dads, grandmas and grandpas, friends and neighbors all turn out to listen to little Johnny or Melinda sing, act, read or play recorders.

Students wait on steep Town Hall steps before performance. Yes, the blond haired one is ours.

In the old days–back in the 80’s and 90’s–a tradition established itself where the finale of the Christmas program consisted of the students singing “Must Be Santa”.

You’ve heard of this song, right?

Who’s got a beard that’s long and white?

Santa’s got a beard that’s long and white.

Who comes around on a special night?

Santa comes around on a special night.

Must be Santa, Santa Claus.

Now that you’re all listening, I want you to imagine our students performing.  They accompany the music with hand movements.  For example “beard that’s white” is accompanied by a movement that looks like combing the beard.  When they sing “Who’s got a bright red cheery nose?” guess what they did?  Of course, they pointed to their cute little button noses.

Just as the song reached its climax the door to the Town Hall burst opened and with a jingling of bells and a loud “HO, HO, HO!” in trotted Santa in his red and white suit, carrying a tote filled with presents for the open-mouthed students (most who had quit singing except for the worldly 5th and 6th graders). 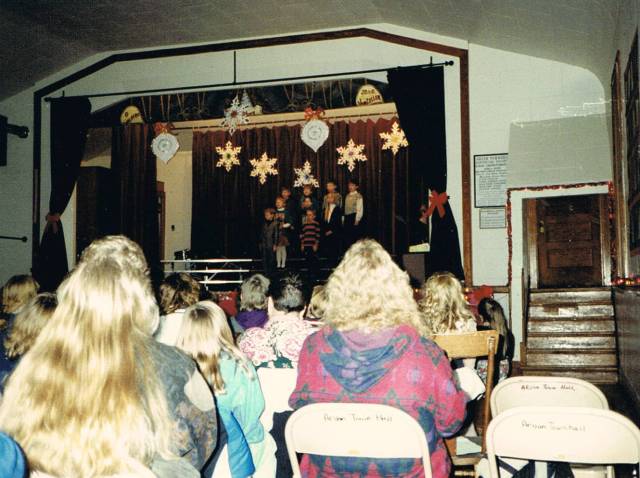 The Christmas Program, circa 1994

Some time in this new century with several new teachers and fewer students the tradition died out, but I still get a nostalgic sniffle hearing that old-time song made popular by Mitch Miller and the Gang.

Unfortunately or fortunately, after this morning I shall never view this song in the same manner. 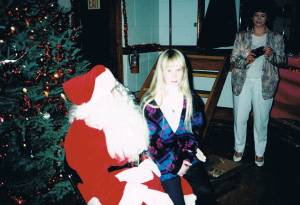 She doesn’t look too happy to be on Santa’s lap, does she?

Our sweet daughter posted a link to “Must be Santa” on her brother’s Facebook page.  Of course her brother was still sleeping in California, but Mama was not.  I started to listen, a soft reminiscent smile on my face…

Until, suddenly, TEARS were rolling down my cheeks!  Not tears of nostalgia–but tears of roaring laughter!!  How could they have desecrated this childhood memory with such a hysterically FUNNY party-scene video?

So here it is, dear Christmas Elves, Bob Dylan singing It Must Be Santa.  (If you can figure which one is Bob Dylan you get the Christmas award!)

P.S.  Be sure to come to our annual Christmas program this upcoming Thursday night.  Even though you won’t hear Must Be Santa, you’ll still enjoy the fruits of the student’s hard work.  I can guarantee you’ll smile.  Nostalgic tears are optional.

I live in the middle of the woods in Michigan's Upper Peninsula. Next to Lake Superior's cold shores. I love to blog.
View all posts by Kathy →
This entry was posted in Uncategorized and tagged Arvon Township School, Bob Dylan, Christmas, entertainment, life, memoir, memories, Must be Santa, thoughts. Bookmark the permalink.

62 Responses to With tears streaming down my face…