Thank you for four wonderful years of blogging here. 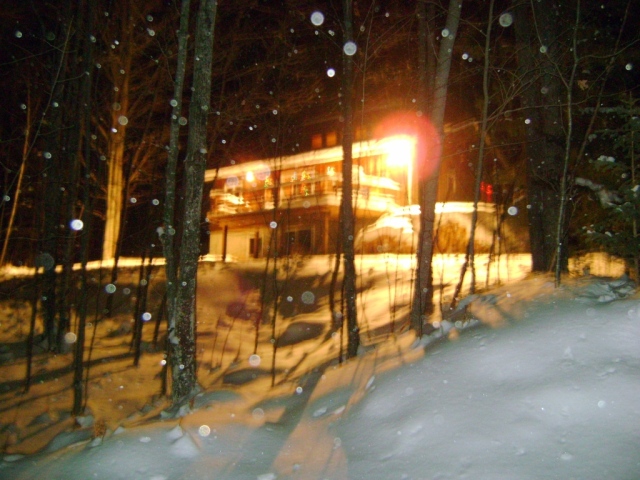 The very first photo I published. Our house creatively shining in the woods.

Will you forgive me a post down Memory’s Lane?

My first WordPress blog started after lighting a grand solstice fire on a snowy night out in the woods on December 21, 2008.  A daily blog called Opening the door, walking outside followed for an entire year.  After less than a ten-day break, Lake Superior Spirit opened its blogging doors on January 1, 2010.

Before that I blogged on Gaia.com (formerly known as Zaadz) a spiritual community website which shut its doors a few years ago and opened a new door at Gaia Community.  That’s where I learned how to blog on this new world of social media, how to honor both loving responders and cranky commenters.  It was sweet, my friends, and fulfilled a deep need to share.  Part of me had always felt cut off from the rest of civilization up here the Upper Peninsula woods.  (It wasn’t true, but part of me felt that way anyway and blogging threw open the doors to the world.)

Before that I blogged at LiveJournal and had at least six readers.  Barry, both kids, and, OK, maybe two friends when the mood struck.

Before that I filled journal after journal with dreaming, poetry, happiness, anger, sadness, trials and tribulations, spiritual compasses.  They now sit in the basement in musty cardboard boxes.

Blogging has meant so much.  Not only did it provide an outlet to share precious stories and photographs, it also offered dozens–no, hundreds–of friends who shined forth with their written words, their encouragement, their thoughts, their own stories.  I have talked on the phone with many.  Met perhaps ten to twenty bloggers and Gaia community members over the years.

Meeting Pamela Grath at her wonderful bookstore in Northport

Since childhood, I have struggled with insecurity at times.  Blogging boosted confidence, big time.  Being featured eight times on Freshly Pressed, the homepage of WordPress, made this blogger a happy camper (although hasn’t completely annihilated insecurity, darn it!)

Here are the stories featured on Freshly Pressed during the past four years:

The Edge of the Known World (January 2, 2010)  I liked this one because, gosh darn, I think we’re all on the edge of the known world all the time.  We’re one step away from realizing we can encompass pioneers of mystery and infinity.  But in truth, this one was about ice forming on the bay.

How to write a WordPress blog & get a zillion hits (March 1, 2010)  Ha, ha!  To think that I would know how to do this.  Still haven’t figured it out.  The editors at WordPress, however, liked the suggestions.

Hark, who goes there in the swamp?  (May 5, 2010)  This is a post about beavers in the swamp.  Don’t you love it when you come face to furry face with a wild animal? 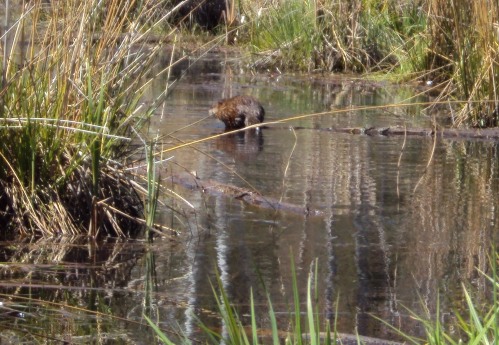 Facebook, we’ve got issues (May 21, 2010)  Yep, I’ve had major issues with Facebook.  Apparently others have, too.  This post has had 10,777 hits over the past two and a half years, kinda proving that this relationship is tentative for many of us.  I still have issues with The Book, but am diligently working at our relationship–for now.  We’re still dating before we’ll decide if it’s Serious, the way blogging is serious.

Don’t sign your blogging contract when you’re sleeping (February 11, 2012) This is about, among other things, my obsession with blogging.  How it can kinda morph into a daily obsession at times.

Bloggers are Real People, too (Meet Ms. Heather and Ms. Bree) (June 17, 2012)  This post highlights some of the many real-life wonderful blogging people I’ve had the honor to meet over the years.  And wishes that everyone gets this opportunity!

Blogging has been a special wonderful amazing gift.

It’s been awesome, delightful, magnificent.  (OK, sometimes it’s been challenging, too. But that usually relates to my sometimes-compulsive tendency to wanna share, share, share, share, stare at the computer obsessively, refuse to leave the glowing monitor to open the door and walk outside…)

Hence, I’m taking another wee blogging break for the upcoming holidays.  Almost all of my breaks last ten days to two weeks before the need to share re-ignites.  We’ll see you when the typing fingers hijack the retreat!

Will pause by your blogging hearth to shake some jingle bells and say hello.

If I don’t see you here before the holidays, have a marvelous Merry Christmas!  Happy Kwanzaa and Hanukkah and Solstice and every other shining holy light in your heart!

Laughing Buddha in the snow

With deep gratitude for blogging–and for all of you.  Thank you for sharing in this little celebration of love and appreciation for something that’s been my passion in these recent years. May you all be blessed abundantly with your heart’s deepest desire. Love, Kathy

I live in the middle of the woods in Michigan's Upper Peninsula. Next to Lake Superior's cold shores. I love to blog.
View all posts by Kathy →
This entry was posted in Uncategorized and tagged abundance, blogging, blogs, creativity, Freshly Pressed, friends, Gaia, life, nature, outdoors, passion, solstice fire, thoughts, WordPress. Bookmark the permalink.

100 Responses to Thank you for four wonderful years of blogging here.