When corn grows unexpectedly in your dreams.

Last night I dream-walked through my garden, a garden planted a long, long time ago in another dream–and, look, how unexpected, sweet yellow ears of corn grew amidst the zucchini and beans and squash vines.

What an unexpected delight during a melancholy weekend.  To think that tender sweet corn might grow when one doesn’t even remember planting fat yellow seeds in spring soil.  Never mind it’s only a dream.

I am melancholy because–well, you parents of grown children know the drill–they come, they go, and one must re-discover oneself in the relative emptiness of the house when it’s back to four footsteps instead of six or eight.

(It was a pathetic day yesterday, she sniffed.  She ate an entire dark chocolate coconut bar, a treat she had vowed to portion out in squares during the month of January.  She stared dull-eyed at the computer for too many woeful hours and wanted to go somewhere, anywhere, except there was nowhere to go.  No where on God’s snowy earth.  She watched the world’s worst movie on her Kindle Flame and read a spiritual book hoping to drown the mood, but it only succeeded in annoying her.

The best part of the day was the moon rising in early morning through tree branches. 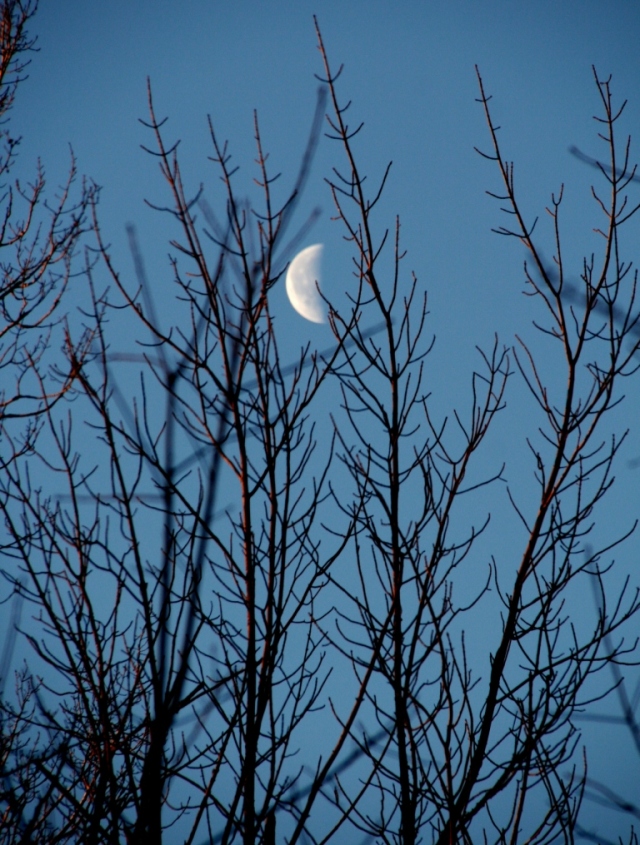 OK, the second best part of the day was a walk up the road just before dark.  She is learning to walk on snowy ice again, as many of you know.  How can she better describe this, so that you’ll understand?  She learned recently that *part* of her walking on ice was learned fear.  The other part is sensible caution.  She is now consciously releasing the fear.  She’ll never release the caution.  It feels heavenly to let go of what is no longer needed.)

Barry is repairing the bird feeder.  Maybe two years ago we put it away, vowing not to feed any more chickadees and juncos and finches.  Fie on finches!  It costs an arm and a leg to feed the chattering winged-ones, and besides, a bear bent the bird feeder with his massive paw, making it seem too much of a challenge to repair.

{Insert missing photo of bent bird feeder here.  Kathy will insert if she ever finds.  However she has looked for it for ten minutes and it’s still Missing in Action.  Try to imagine it, please.}

However, when our daughter visited from New York City, she remarked on the sterility of our woods.  She claimed more wildlife existed in Queens than the “wilderness” of Michigan’s Upper Peninsula, alas, alas.

“Where are the birds?” she demanded and we sheepishly announced our decision a couple years back.

We still have tall white buckets of sunflower seeds lounging in the closet, so we threw handfuls onto the snow, hoping to attract the errant chickadee flock back near our garden so she could hear the “chicka-dee-dee-dee” sing its sweet winter song.

The day after she left, the chickadees returned.  They’re munching hungrily on the seed.  Also, the temperature warmed to the 30’s after she departed, and hundreds of animal tracks now decorate the woods.  (Wildlife hibernates or “torpors” when it’s cold.  Yes, it can look sterile on frigid days in mid-winter, it can, except when one feeds birds…which we are about to do.  Again.)

If a chickadee misses a sunflower seed it may fall down, down, through the white snow and burrow in soil until spring.  An unexpected sunflower might stretch its yellow head toward the sun in summertime, a corn-colored sunflower, the shining glory of a July morning.

A chickadee might alight upon it and eat sun-warmed fresh sunflower, and we might lather sweet corn with butter and salt and munch on our deck in short sleeves, tossing the munched-up ears into the woods.  Perhaps we’ll even dine with children flown in from San Diego or New York City, our moods light and cheerful, a moon grinning between full green leaf branches, whispering, “Precious moment, don’t miss it, precious moment, don’t miss it…” like a chickadee’s sweet song. 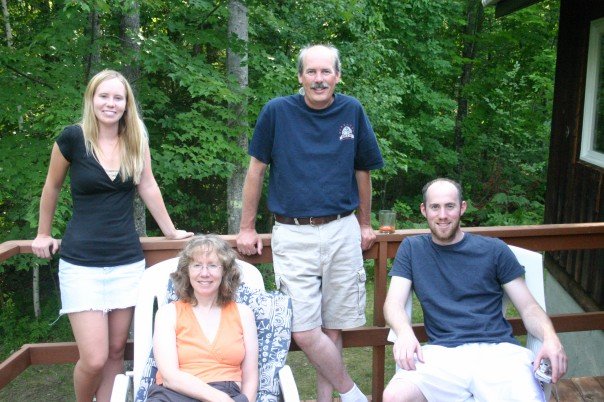 Precious moment a few years ago…

I live in the middle of the woods in Michigan's Upper Peninsula. Next to Lake Superior's cold shores. I love to blog.
View all posts by Kathy →
This entry was posted in January 2013 and tagged birds, corn, dreams, family, garden, life, nature, photography, thoughts. Bookmark the permalink.

41 Responses to When corn grows unexpectedly in your dreams.