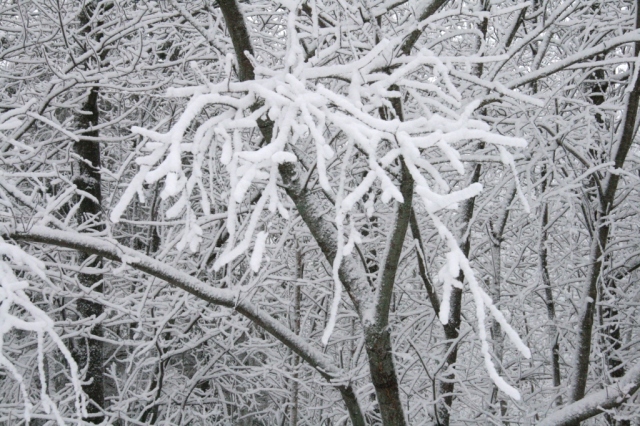 Such a hullabaloo in the Northern forest! 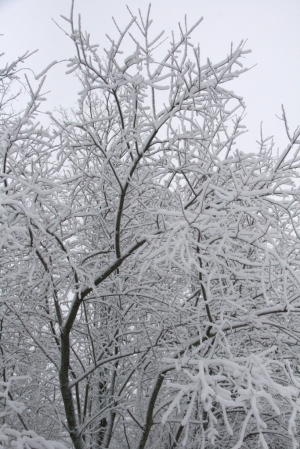 The Winter Queen, in her fury, locked Spring Seed Boy in a shed behind the six-foot snow bank.

The Sun King tried, yes he tried, to negotiate a truce.  He shined his hardest, but to no avail.

The Mourning Doves in the bird feeder mourn.  The poor robins, just in from the sunny south, look in vain for worms beneath the endless white snow.  The bear refuse to leave hibernation.  The trees refuse to leaf.  The ice on the lake refuses to melt. 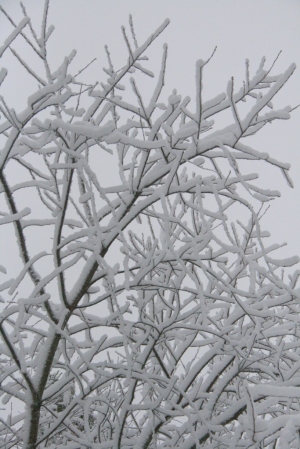 Will the sun ever shine again?

It’s a hullabaloo, a great feud, and we innocent bystanders are caught in the hysterics.  Yesterday it snowed all day.  On April 19th, mind you!  Locals are swooning with the indignity of it all.  School had to be dismissed early–again.  You couldn’t see fifty feet in front of you, I swear it, when Aunty Blizzard added her support to the Winter Queen’s edict.

OK, the old-time Forest folk remember a similar event.  Back in Year So-and-So Spring Rain Shower fell in love with one of the Snow Boys, and, hey, white stuff fell from the sky on the 4th of July!

Will the tomato cages ever see tomatoes?

Change is required.  It needs to stop snowing–now. 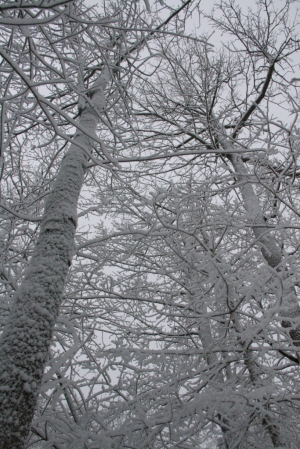 Will it ever look up?

Is that a house behind those snowy branches?

Is that the shed where she locked Spring Seed Boy?

Are these the crystallized tears of Young Snow Maiden?

In the meantime, will you grab the snow shovel?

*This story was brought to you–in part–by the Weekly Photo Challenge at WordPress. It was called Change. I would say this post qualifies.

I live in the middle of the woods in Michigan's Upper Peninsula. Next to Lake Superior's cold shores. I love to blog.
View all posts by Kathy →
This entry was posted in April 2013 and tagged blizzard, change, fable, life, nature, photography, spring, story, weekly photo challenge, winter, writing. Bookmark the permalink.