Our son and his wife (who married, as you may remember, last October) are flying off for their belated honeymoon in France and Italy.

I’ve packed myself in Christopher’s suitcase–never you mind that his suitcase is halfway across the country in San Diego–and I’m going to visit Paris, Florence, Nice and Rome.  I’ll be so quiet they won’t even know that the mother-in-law is ooohing and ahhhing up that Eiffel Tower.

I promise not to speak.  In fact, they won’t even know I’m there.

My “brother” Patrick, “sister” Silvia and yours truly in the Swiss Alps, no kidding.

If I were truly going, this would be my fourth trip to Europe.  For someone without oodles of cash, this is nothing short of miraculous!  The first trip happened at age 17.865.  (Eighteenth birthday was celebrated with a MOST delicious beer in Switzerland.  Best beer I ever drank.  Last beer I ever drank until discovering fancy brews here in the states a few years ago.  And haven’t yet sipped an entire beer in its entirety.)

Would you like to hear more about that first real trip?  I saved and scrimped and scrimped and saved for over two years, working in my dad’s drugstore, attempting to accumulate the $1,000 needed to travel to Switzerland with Experiment in International Living.  The year was 1975.  I finally scraped together the last penny and graduated from high school.  My parents then gifted me with $1,000 for graduation.   I broke down and cried.

My Swiss mom and Suzanne in the Black Forest

The summer was golden and scary and wonderful and negative and positive and, yes, one of the best memories of this life.  First, some of us attended a language camp somewhere in northern Massachusetts where we spoke immersion German 24/7 for ten days.  I remember being so scared and uncomfortable that I got up and–excuse me–vomited every morning before breakfast.  That’s how shy this one was.

As soon as we started dreaming in German we were bussed to New York City to meet the rest of the group and flew over that there big ocean to Grand Paree.  We arrived sleepless, exhausted, not speaking French and proceeded to sight-see.

No wonder I can’t remember anything except impossible toilets on the street corner, no in-room bathrooms in the dingy hotel, endless steps upward to cathedrals.

Friends in the group, Eric and Terry

Two days ago, pondering our son’s honeymoon, and their possible trip to the Eiffel Tower, I wondered if possibly–yes possibly–I had climbed the Eiffel Tower.  Searched faulty memory banks.  A dim dusty memory exists of nervous knees, crowded overlook, city lights twinkling down below.

But, as memories go, could this simply be a scene from a movie?

How to find out…?  Of course, ask the one person from the group I still know on Facebook–Terry–if this auspicious event actually occurred.  She claims it did.  She said we couldn’t climb all the way to the top of the tower–it was closed–but we enjoyed a view from the observation deck. 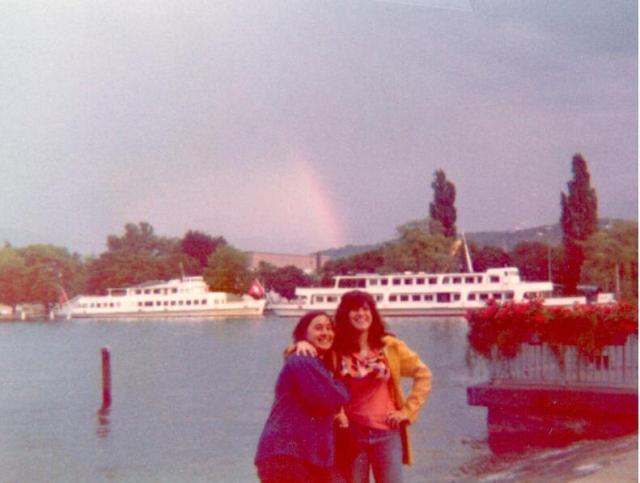 Terry and Suzanne. It was a rainbow of a summer…

Members of our group, aptly chaperoned by a fellow named Tom, boarded a train for Basel, Switzerland, where we spent the next month living with a host family, bless their souls for a) being very nice to a painfully shy girl from Michigan and b) speaking mostly English.

My “sister” Suzanne and I became very close.  That was the summer everyone wore too-tight jeans and she taught me how to lie flat on the bed and zip them up.  Then you were permitted to stand and walk around and suffer for the rest of the day, but, gosh you looked hot! At least that’s what Suzanne promised, although I silently doubted it possible to look hot except when sweating.

Silvia was the sweet younger sister and baby brother, Patrick, played a mean game of ping-pong.  A Welsh Corgi named Kerry barked and the parents taught this American how to eat yogurt (we didn’t have yogurt back then in the US of A, honest, can you imagine?) and sparkly mineral water and bibb lettuce.  Imagine!  Green lettuce which was not iceberg.

Oh, and real bread.  REAL bread!  I gained ten pounds that summer because the bread tasted so darn delicious.  Not a bit like white Wonder Bread from back home.

We took a train up into the Black Forest and visited the mother’s parents over east of Zurich and rode a cable car up into the white snowy Alps and…it was magnificent.

Once I decided, bad guest from America, to visit my friends Terry and Eric one evening on the other side of town and my host mother fretted and fussed and wanted to refuse me, but maybe I was obstinate, and went anyway.

The culmination of our Swiss experience was a splendid circular tour of the beautiful country with our original group and our new Swiss brothers and sisters–we paused at Leysin and sang, “Smoke on the Water” in memory of Montreaux and Voulez-vous coucher avec moi ce soir which delighted our teenage hormones because of course it invited sex in a language few of us could speak. 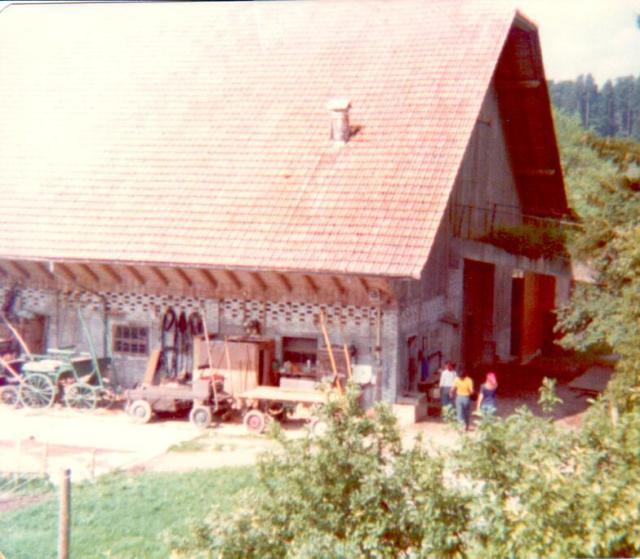 The horseback riding camp brought us to a rustic back-country farm where dead flies hung in droves on sticky paper over the kitchen table and we bounced through endless fields on hot horses.  Sometimes the horses got bored and galloped wildly and this Michigander held on for dear life and prayed to all the Horse Gods for salvation. 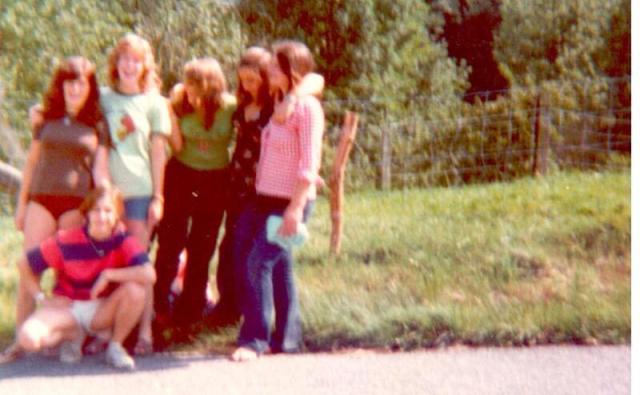 Two months after we learned to dream in German–even though most of us couldn’t even understand six words of Swiss German–we flew back home via Paris.

What a summer!  Years later it still shines bright in this foggy memory, days of innocence and awakening.  I realized the smallness of my former world view and saw how it might take a lifetime to begin realizing how to allow and encompass differences and similarities.

My last night in Switzerland…for many years…

I live in the middle of the woods in Michigan's Upper Peninsula. Next to Lake Superior's cold shores. I love to blog.
View all posts by Kathy →
This entry was posted in May 2013 and tagged Europe, excahnge student, Experiment in International Living, life, memoir, memories, Switzerland, thoughts, travel, trip. Bookmark the permalink.

30 Responses to Summer in Switzerland