Santas and Snowmen play in the snow

Santas and Snowmen playing in the snow

Every year the Santas and Snowmen sleep in the basement until the first week in December.  Then they march up our spiral stairway, one by one, preparing to help us celebrate the Christmas holidays in style.

Many long years ago I won the five-inch high little fellas in a local raffle at the Aura Hall.  Nine of them winked at me from a red, white and black tic-tac-toe board and how I delighted to bring them home.

Little did we suspect that the Santas and Snowmen were clever little tricksters! They would tiptoe off their staid and respectable tic-tac-toe board and perform amazing acts of silliness which resulted in grins on any Scrooge faces.

Oh, I can’t even recall all the merriment over the years! One of the first years one of us–we won’t reveal who–set up a tableau in which the hapless fellows marched like lemmings, one following the other, off our living room coffee table.  (Please, do not judge us too rashly. We know we have weird senses of humor…)

The second year the Santas and Snowmen drank too much on Christmas Eve, shame on them!  Empty beer bottles lay around their fallen bodies.  It was a frightful scene.  (We laughed so hysterically over this scene that we could barely function…HIGH FIVE for the Drue who thought that one up!)  Although I still remain partial to the morbid lemming scene.

The Santas and Snowmen have been found perched ‘way up high among our plants.  They hide in the most unsuspecting places resulting in hours of delighted amusement. 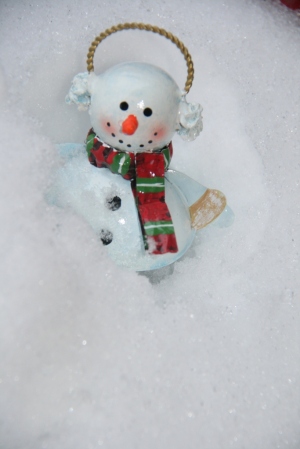 You gotta love the smile on this face every Christmas!

In 2009 the crafty little fellows Opened the Door and Walked Outside.

In 2010 they enacted an adventure with a Tin Man and some Popcorn just days after my gall bladder surgery.

In 2012 I told you the history of the Tomfoolery of our Santas and Snowmen.

Who’s to say what else they might do THIS year–besides playing in the snow on a day when school’s been cancelled due to freezing rain.  If you have any suggestions to give them, I shall (without peeking of course) print them out anonymously and proffer to one of the tricksters, who look so innocent on their tic-tac-toe board.

Am also interested in hearing of any of your fun holiday traditions.  What warms your heart during these darkest days of the year?

I live in the middle of the woods in Michigan's Upper Peninsula. Next to Lake Superior's cold shores. I love to blog.
View all posts by Kathy →
This entry was posted in December 2013 and tagged Christmas, fun, holiday, humor, life, play, Santas and Snowmen, snow, thoughts. Bookmark the permalink.

24 Responses to Santas and Snowmen play in the snow