My story isn’t as amazing as Pam’s.  It involves no tears.  It happened on a flight in late July, 2015.  (Where was I headed?  One moment, must check the magical journal referred to in last blog.)  Ahhh, yes, I was flying from Houghton to Chicago to Portland, Oregon to visit my precious daughter.  The date was July 22nd.  I had just quit blogging for an extended spell the previous month.

Haystack rock. This is where I ended up a few days later on the coast of Oregon

I boarded the plane and discovered my seat mate was a large silent man.  He allowed me to crawl past him to the beloved window seat, but there was no communication.  We sat without exchanging a word.

Then I began to feel very irritated.  He was one of those large males (excuse me, males!)  who felt larger-than-life.  He seemed to steal my space.  His arms stole the arm rest.  He oozed himself into my personal space.

I silently fumed.  You know how the mind over-reacts at times.  (Darn you!  Stay in your seat!  Behave!  Quit invading my space, you obnoxious fellow!  Quit exuding so much confidence!  Quit being one of those stupid macho men who think they own the world!!)

We didn’t exchange two words as the plane flew up above the July clouds toward Chicago.

Luckily, something inside finally tamed the Wild Fuming Beast inside me.  It said, “Kathy, Kathy, Kathy, Kathy, why don’t you just let go for a moment and reach out from love instead of these negative thoughts?  C’mon, you can do it!”

I turned to my seat mate and managed, “Are you going to Chicago, or elsewhere?”

He was headed to the East Coast for a meeting. 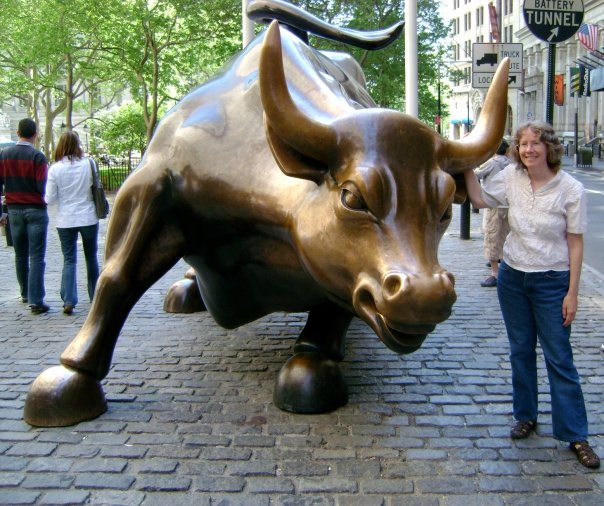 Probably he was going someplace like Wall Street. Here I am in 2009, after another airplane trip.

We started chatting about this and that.

We chatted about that and this.

Suddenly, I felt this encompassing love.  OH, he’s just a guy sitting on an airplane.  He’s not obnoxious, not invading my space, not macho.  OK, he might be all of those things, especially if you wanted to think of him in that light. But I felt only love.

Then he said,  “Hey, where are you headed?  How long do you have in Chicago?”

I had quite a wait in Chicago before the Portland plane took off.

“Just wondering–would you like to spend your extra time in the United Airline club?  I have access, and would like to invite you.  I have other things to do there–but you’re welcome to come in with me and enjoy some free food, drink and wi-fi.  What do you think?”

By that time, I am in love with a Universe that is friendly and cooperative and loving.  Just by changing one’s missed perceptions…miracles can happen.  You can get a free meal in a United Airline Club.  The world’s possible coldness and remoteness can collapse for just an instant.

Thanks, Pam, for this memory.

Any of you readers ever experience a missed perception that turned out to be pure gold?

I live in the middle of the woods in Michigan's Upper Peninsula. Next to Lake Superior's cold shores. I love to blog.
View all posts by Kathy →
This entry was posted in January 2018 and tagged airplanes, family, friends, inspiration, love, miracles, thoughts, unexpeccted, United Airlines. Bookmark the permalink.