We awoke to a February snow.  Maybe five new inches decorated our winter landscape. The temperature promises to inch up in upcoming days into the 30’s and 40’s (0 to 7 C), but for now winter still sings her black and white songs.

Black and white world out here

When I first returned from Florida I felt kind of black and white and blue for a few days. There’s so often a feeling of traveling transition, of settling back into the quiet after days of busyness.

Then news of the school shooting down there pierced this heart to the core, and I felt raw and sad and despairing.

I’m sure many of you felt the same.

I’m having trouble even typing a paragraph about it a week later.

Sometimes we’re called to move outward to help try to repair a broken world. Sometimes I do, as well. But quite often I feel an opposite pull:  to move in toward consciousness, toward the Universe.

I can’t explain this in words, but it feels like silence and consciousness can heal at the source.  It feels like moving toward the center of things, toward the essence, and radiating from that.

Maybe some of you know what I mean. 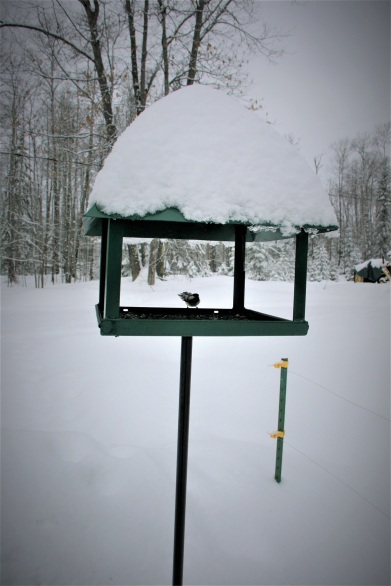 Let’s feed the birds before they starve

So there have been many days of silence here.  Or meditation.  Or whatever words you want to use to describe this inward movement.

And, in between the stretches of silence, I visit friends, wash dishes, chat on the phone, help Barry with wiring a new electrical box for a woodshed light and ponder South Korean funerals. (My daughter-in-law’s father died recently; she and Chris traveled to Korea for the funeral.  The funerals last three long days.)

When some people go quiet, others often worry.  Perhaps they are feeling isolated, depressed, out-of-sorts.  Apparently some folks turn away from life into the silence and feel bereft, apart, not anchored.

I have felt like that before, but mostly turning toward the silence for me is a joyful thing. Peace appears.  Joy bubbles.  The silence itself embraces and holds the world close, an act of beauty.

Part of me is a monk at heart, a cloistered nun, a being of wordless prayer.

But I don’t talk about this to almost anyone.

How can you talk about silence?

This morning, with our new snow, I decided to strap on the snowshoes for the first time this winter.  To walk slowly through the landscape and feel the weight of heavy wet snow on branches, the way snow encompasses a dead oak leaf. 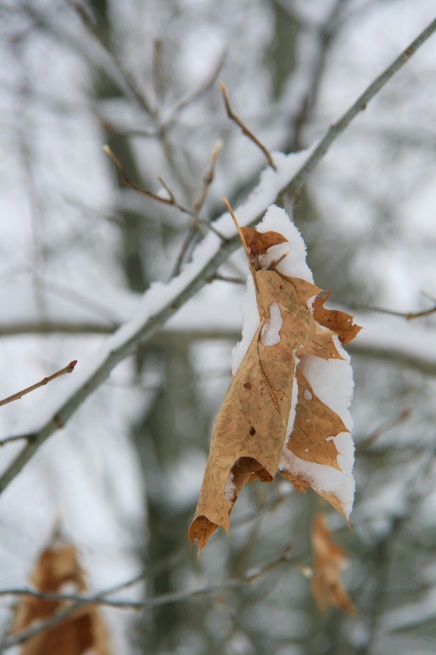 I am not pushing winter away yet, mostly because it’s still here. So many times we wish and wish and wish something else to appear.

But the *present* is our gift, isn’t it?

I remind myself of this when the busy mind wants something other than “what is”.

I didn’t snowshoe for long, mostly because the heavy wet snow makes for some hard trudging.  One foot up, pant, one foot down, pant.  The snowshoe dance rhythm, right?

Tractor which will plow the driveway when husband returns from work

News flash!  Husband just returned from work.  I need to finish this up and hop to my duties.  Which involves sweeping and brushing off the cars and wind shields, and then moving cars after the plow clears the driveway.

We’re seeing some wildlife again at this cusp of winter.  A partridge preened itself high in a poplar tree over the kitchen window the last couple of days.  Finches and nuthatches and blue jays chirp around the feeder.  Two squirrels harvest sunflower seeds.  They scurry in long tunnels beneath the snow between the feeder and oak tree.

Last weekend, one of the squirrels became annoyed at its friend as it peeked its head out of the tunnel.  The dominant squirrel used its little hands to throw snow at the mouth of the tunnel and completely buried the other fella!

The following photo shows the squirrel behaving a little better.

Wishing peace for you, and moments of embracing silence that heals a world-weary heart.  Love, Kathy

I live in the middle of the woods in Michigan's Upper Peninsula. Next to Lake Superior's cold shores. I love to blog.
View all posts by Kathy →
This entry was posted in February 2018 and tagged consciousness, contemplation, healing, peace, photography, silence, snow, snowshoeing, spirituality, squirrel, thoughts, Upper Peninsula, winter. Bookmark the permalink.