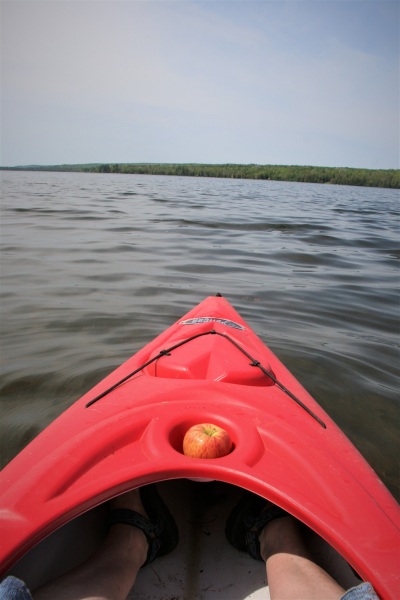 Look at those kayak feet! Now, would you think there might be a snake (or snakes) in your kayak?

OK, friends, I have a story to tell.

It’s Memorial Day weekend, 2018, and my friend Sherry messages.  Would I like to go kayaking with her on Monday?

Oh yes.  Kayaking with Sherry has proven fun in the past!  I would love to go again.  Especially since our weather has been so warm, so sunny, so lovely. 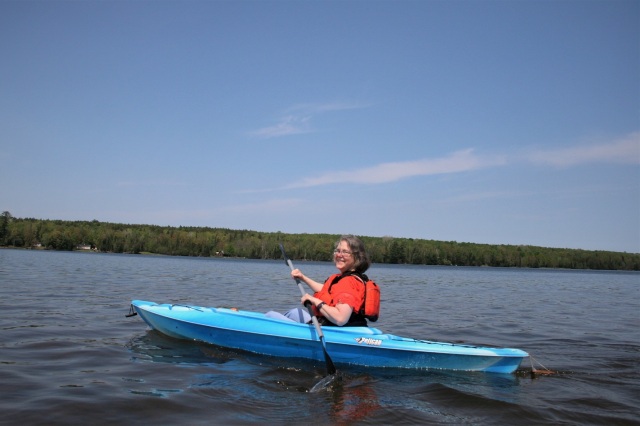 Except within the hour she posts a Facebook update.  She’s found a snake in her kayak.  Oh no!  (I have a strange relationship with snakes.  Sometimes they scare me to death.  At other times I feel a snaky kinship and connection.  The snaky kinship side must have been prevalent because I bravely responded something like “I am not afraid–I will dump it out!” or something equally carefree.)

Awoke in the middle of the night shivering thinking “Oh no–snake in kayak–do I have to go kayaking??”

We arrived at said kayak, tipped it over, shook it vigorously, and announced it snake-free. Obviously, no snake would survive that erstwhile shaking.  We jumped it our kayaks and headed out onto the beautiful Huron Bay.

Oh, how beautiful are our bays!  It was nearly 80 degrees (26C) with the skies turning from cloudy into blue.  We paddled lazily, chatting away.  I worried about keeping up with a more experienced paddler, but we easily stayed together admiring reeds, birds, hammocks, and old underwater posts from a long-ago pier. 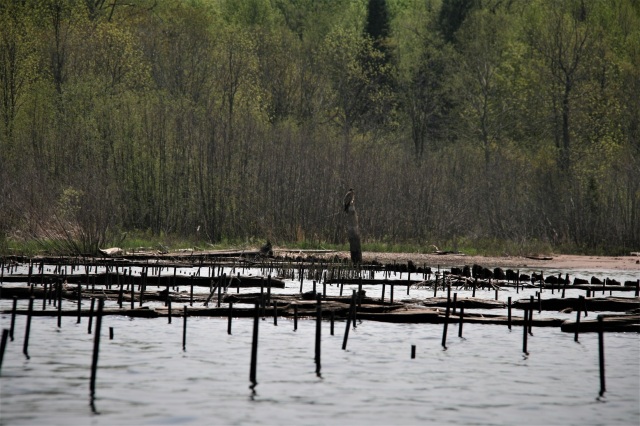 We munched our apple-lunch and aimed back homewards when suddenly–

You know what’s coming, don’t you?  Sherry glanced downward and noticed at least a three-foot garter snake wriggling toward her feet.

Sherry notices this guy beneath her feet

I, of course, from the accompanying kayak, calmly spoke in a monotone urging her courage onward.  “Stay calm,” I monotoned, “it’s only a snake.  You’re doing great.  You’re doing fine.  Just ease your legs out on top of your kayak.  Stay calm…”

It’s easy to speak from a kayak six feet away.  I had no snake slithering beneath my trapped feet. In her shoes I might have jumped in the lake and swam toward home.

Sherry placed her legs, one at a time, almost tipping her kayak, almost falling into the cold waters of the beautiful Huron Bay, but keeping it upright.  I praised her skill, her fortitude!  “Deep breathing,” said Kathy from her faraway perch, “You’re doing great!”

We then proceeded to paddle fast than a speeding bullet toward shore.  We probably paddled 90 miles per hour!  (OK, I am exaggerating, but only because it seemed that fast.)

OK, I admit, I lost all photographic ability in the midst of our crisis. The photo is over-exposed. But that’s because Sherry was over-exposed!

The Ravine River Bridge awaited our kayaks.  We zoomed beneath.  It was Rescue Time.  We needed to save Sherry and the hapless snake.  How to do this?

I tossed the Canon camera onto the rocks (in its padded camera bag).  Then proceeded to attempt disembarking without her holding my kayak steady.

Please do not laugh in advance.  You are so right–I am not kayak seaworthy–and proceeded to fall over into the cold waters of the Ravine River!

Dripping wet, I uprighted and proceeded to rescue my friend from the poor scared garter snake (whom we were sure had babies in the kayak).

I helped Sherry disembark with the help of the kayak paddle.  She retreated to a nearby stump to supervise.  Now…how to get the snake out of the kayak?  How to determine where the baby snakes hid?

Your blogger suddenly grabbed the paddle and proceed to Snake Talk.  You know:  “Hey, good snake, you’re OK, now climb onto this paddle and we’ll save you from Death by Sherry’s Feet!”

Fortunately, the snake decided to listen.  He climbed upon the paddle and I gently place him upon the rocky shore.  Off he slithered, all those long snake-like feet of him, his red tongue expressing disapproval and shock.

Our new “friend” slithers away

We still didn’t know if the snake babies existed.  Sherry thought about walking home, getting her car, and collecting the kayak.  But this woman is courageous!  She garnered her wits about her, plopped back in the kayak, and paddled home!  She was a bit hesitant, but pulled it together to earn my utmost respect and admiration.  Way to go, Sherry!

I was dripping wet, yet felt strangely elated.  Grinned from ear to ear.  We kayaked with SNAKES! We were so cool, weren’t we?  Not a bit afraid, were we?  (OK, it was probably just one snake.  There were probably no babies.  And it wasn’t even in my kayak.  But it was fun–and we’re gonna talk about this for years to come.  Aren’t we, Sherry?)

Now you, dear readers.  Would YOU be scared?

I live in the middle of the woods in Michigan's Upper Peninsula. Next to Lake Superior's cold shores. I love to blog.
View all posts by Kathy →
This entry was posted in May 2018 and tagged friend, garter snake, humor, Huron Bay, kayak, kayaking, nature, snake, Upper Peninsula. Bookmark the permalink.

50 Responses to Kayaking with snake(s)