Dance of illumination in the woods

I sat on the couch this morning watching the mind leap from past to future, yesterday to tomorrow, always spinning a thousand imaginings.

Slowly the restless mind settled into the ambiance of the room, the shadows of light dancing on the green carpet.  Slowing the moving ocean of mind lost its wind-driven busyness and opened itself to what is.  What presents itself in this precious and fleeting moment.

I pondered, for the at least the hundredth time, how challenging it is to photograph the mystery of the forest.  (At least for an amateur photographer.) You peer at the most interesting objects in the woods–a twist of tree trunk, a fallen log, a necklace of leaves–and they rarely seem to appear on the camera screen with anything that resembles wonder.

And I am most interested in photographing wonder.  Not always fickle beauty, which arises with fleeting bursts of shimmering energy before surrendering to another incarnation. 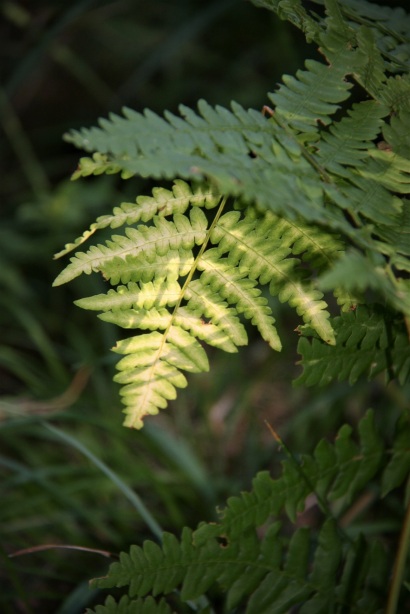 It may be because the woods can be darker than the open prairie, the glowing lake, the long slow vista.  Light dances between branches here.  It refuses to stay put.  It twinkles against a thimbleberry blossom, then moves on.  Light seems restless here:  always passing by, never staying, eager to illuminate the next of life’s creation.

This morning I thought, “To heck with it!”  There must be some objects that the Universe will allow a photographic momentary capture.  “Get off the couch,” I suggested, and the hands found the camera on the bookshelf.  Opened the door and walked outside.

I wore long pants and sweatshirt to protect against ticks, mosquitoes and other woodland pestilence and plunged down the ravine toward the mystery of the flickering illuminating light.

Arced a large circle behind our house, seeing where the eye delighted, and snapped.  Here, here, here. 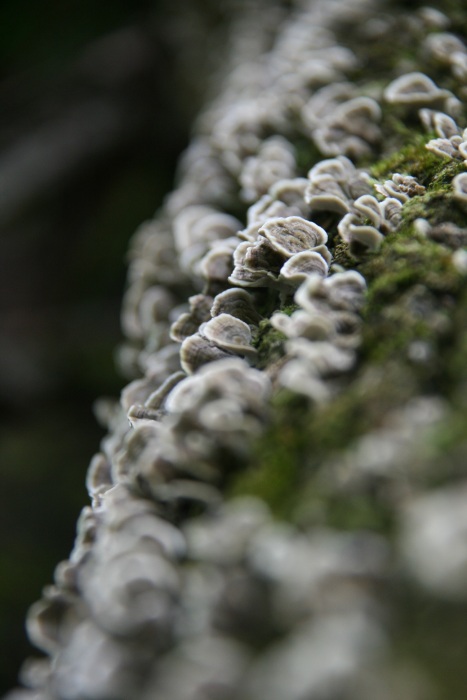 One of the lessons of the woods:  Impermanence.  Death and rot and decay abound.  Everywhere trees and plants and leaves disintegrate.  Sometimes bones and feathers appear–but not today. 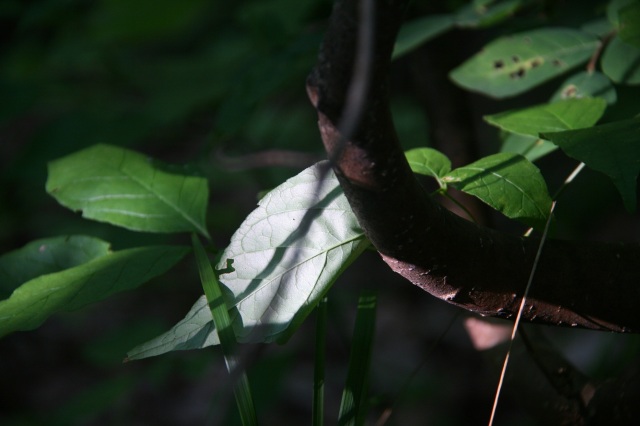 New life also abounds, burrowing up and around its decaying mulch.  A child births; an elder dies.  Sometimes the child tree also perishes.  Rarely the elder tree matures into old-growth.  It’s an interconnected network out there, folks, everything depending on everything else.  Cooperation between species exists, as does survival-of-the-fittest.

We humans could learn much from the woods, if our restless minds might settle down a bit.  If we can move beyond our sense of separateness and division.

I took about sixty-four photos.  These ten–perhaps–capture a little of the woodland dance this morning behind our house.

Thanks for joining me in this forest meander this morning.  What simple beauties has nature revealed to you recently?

I live in the middle of the woods in Michigan's Upper Peninsula. Next to Lake Superior's cold shores. I love to blog.
View all posts by Kathy →
This entry was posted in July 2018 and tagged death, forest, illumination, impermanence, life, light, photography, photos, wonder, woods, writing. Bookmark the permalink.

34 Responses to Dance of illumination in the woods