This March afternoon–with about five to six inches of new wet heavy snow here in our never-ending snow country of the Upper Peninsula–I have been looking through old photos once again.  (Not that I look through them often.  Just every once in a while, and today was one of those whiles.)

Happily preparing to camp out in the patch of bare ground in the garden, March, 2009 (all for the year-long outdoor blog, mind you)

After awhile I became interested in March photos during the last decade, 2009-2019.  I have been blogging here at Lake Superior Spirit since then (on and off, and off and on) and decided to cull a photo or two from every year.

Just to think back.

Because, my dear readers, time Marches on…

The first photo is all the fault of the year-long outdoor blog.  For some reason decided to camp out in our garden as soon as enough snow melted.  I was continually thinking of fun & unusual outdoor activities to do–in order to better write blogs.  That’s one reason I look back on 2009 so fondly.  It was a year of so many interesting activities!

If you live along the shores of the Keweenaw and Huron Bays, you may enjoy ice fishing in the winter.  My husband is (or has been–before the heavy hard-to-navigate snow this year) an avid ice fisherman.  So many of our photos portray ice fishing in March.

In March, 2011, Barry and I flew to San Diego, California, to meet his future wife’s parents from South Korea.  A sunny memory!  No snow anywhere in sight! 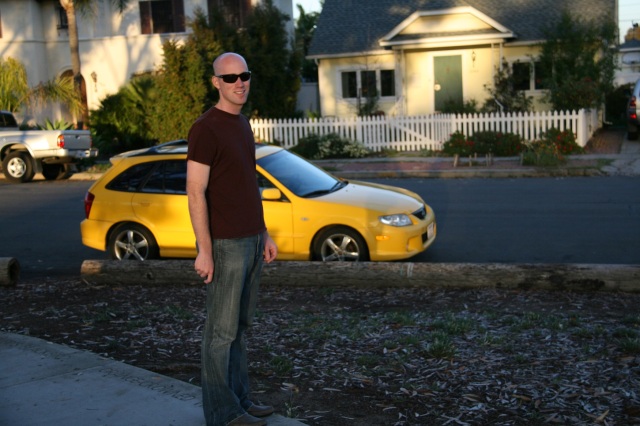 We did see lots of seals, though. 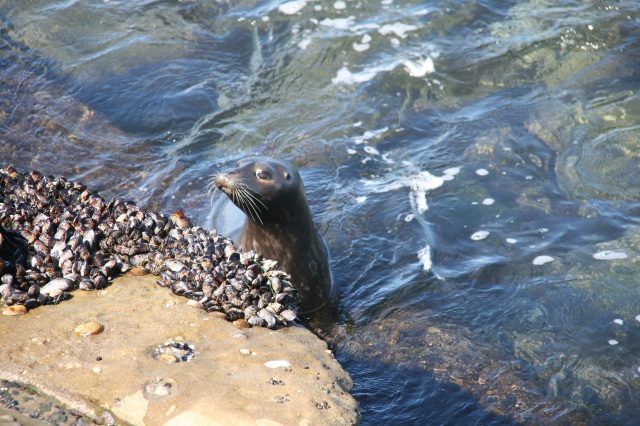 Through the rear-view mirror March 2012

I loved this rear-view capture of March, 2012.  The sun rising (even though it looks like it’s upside down and sinking) over the ice on the Huron Bay.  I believe I was going to work at the school.  Back in the day. 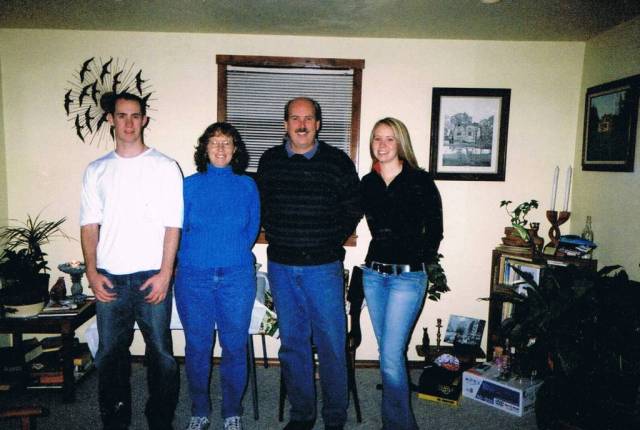 I published this photo on the blog in March 2012. However, I think it was taken before that. Time marches on…

Do you know how challenging it is to determine which photo came from which year?  Per example:  see above picture.  It is listed under my March, 2012, file.  However, did I copy and use it willy-nilly from another year?  Or was it actually taken in 2012?  I am suspecting it was taken earlier, but it will take an astute family member to ascertain exactly when.

We take Derrick ice fishing in March 2013 along with “Flat Stanley” of course!

We had a great time taking this young man ice fishing in 2013.  It sparked an international incident, some of you may remember.  Amy Lynn and Sybil (fellow blogging buddies from Nova Scotia) made a “Flat Kathy” doll and proceeded to send her to various places around the world.  I believe she enjoyed a long stay with Reggie in South Africa.  Round Kathy wishes she could have been visiting around the world, too, instead of only her flat counterpart! 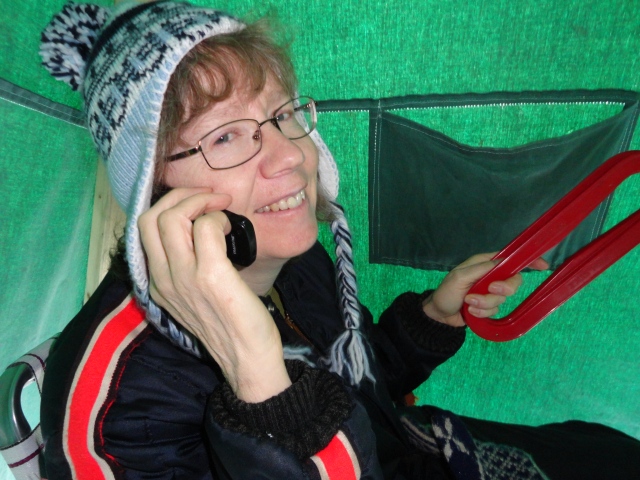 Talkin’ on the cell to Florida while fishing in the ice tent, March 2013

The following 2014 picture consists of shoveling snow.  We only THOUGHT in 2014 that this was hard.  Little did we know about 2019 just around the corner… 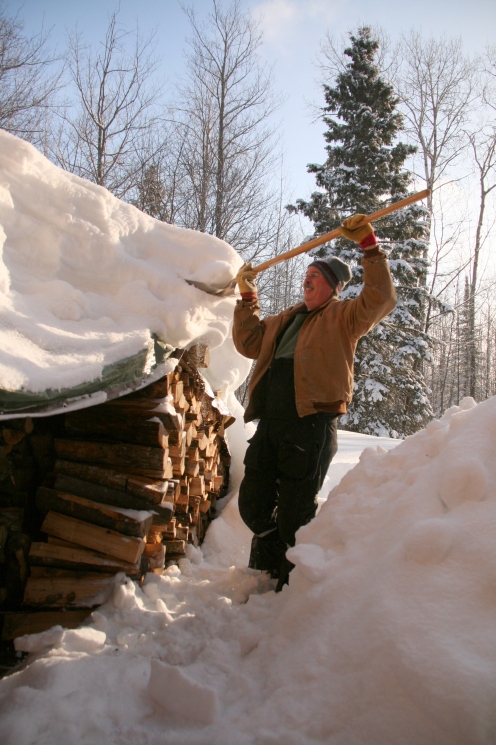 Pretty close to March, 2014. Shoveling off the wood pile–before we built the wood shed.

I might as well feature ice for 2016, as well, but let’s go solo and a little more artistic.  Art with a simple flavor.  Ice with a single swoop. 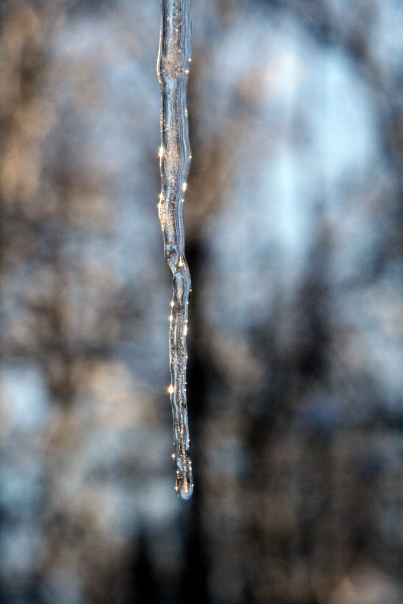 The following March, 2017, photo is a bit questionable:  if it really was March.  If it really was 2017.  But I am going with it because otherwise you’ll get no March 2017 view.  Twas a beautiful night on the harbor. 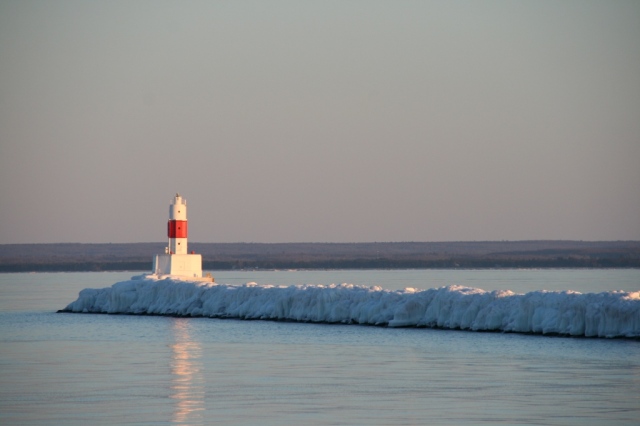 We shall wrap our decade long time-Marching tour with more ice fishing.  Even though it looks like your blog writer might do a lot of ice fishing, she does not.  The husband is the resident expert. 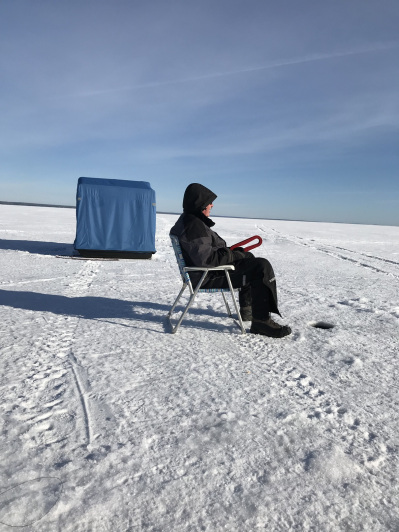 This year our specialty is snow.  Old-timers say they haven’t seen a winter like this since their childhood.  If we’ve seen one in the forty years we’ve been here–well, time marches on–and we’ve obviously forgotten about it.

All I can say is Think Spring!  We have predictions of over an inch of rain later this week.  As long as this heavy wet rain doesn’t collapse any more local roofs, we’ll be good for it.

Has spring sprung where you are?  Does time continue to March on in your neck of the woods?  Do you talk about anything besides the weather?

I live in the middle of the woods in Michigan's Upper Peninsula. Next to Lake Superior's cold shores. I love to blog.
View all posts by Kathy →
This entry was posted in March 2019 and tagged ice, ice fishing, Lake Superior, March, memories, personal, photography, snow, thoughts, Upper Peninsula, weather, winter. Bookmark the permalink.

35 Responses to Time Marches On