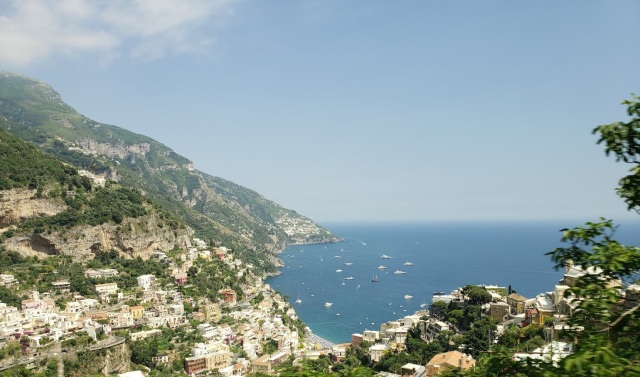 Such a nostalgic day!  One year ago today–June 22, 2019–our daughter and her fiance married in Positano, Italy.

It was the trip of a lifetime.  Twenty of us traveled across the ocean from the United States to see the bride and groom exchange vows of love and commitment along the Amalfi Coast.

How many times we have exclaimed this spring:  Thank goodness the wedding was last year instead of this year!  Can you imagine if you’d planned an Italian wedding in 2020 amidst the coronavirus pandemic?

We look back at our holiday in Italy so fondly.  Well, most of it.  Less than a half hour after disembarking from our Delta flight at the Rome airport I became very sick with my ongoing digestive issues.  The first two and a half days in Naples passed in a blur of intestinal woe.  (And yet–you know how life works–so many good memories stand out even in the midst of illness.) 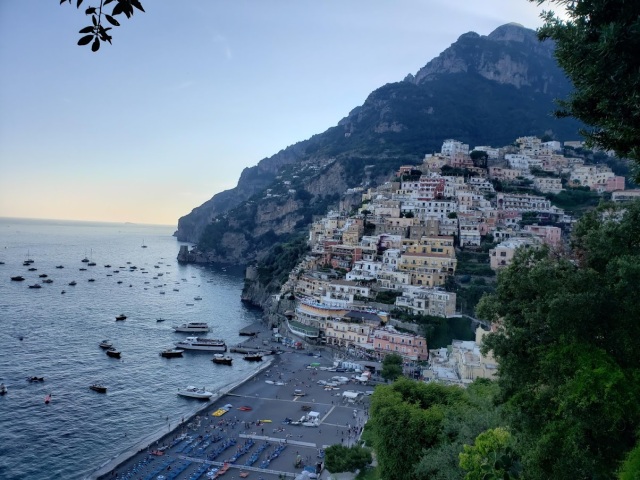 I was so afraid of missing my daughter’s wedding due to illness.  The morning we were scheduled to take a tour to Pompeii with our son and daughter-in-law and friends, Deb and Chuck from here in the Upper Peninsula, it felt impossible to go anywhere.  We called a private taxi to transport us to Positano–even though that felt impossible as well.

We discovered we wouldn’t be able to check into our Airbnb until 3 p.m. so I would be sitting on the curb sick anyway.

“Let’s cancel the taxi and go to Pompeii anyway,” I mustered.  “I can sit on a bench while you guys tour.”

We proceeded with that plan and guess what?  Within an hour of leaving Naples I felt so improved that it was possible to tour the ancient ruins.

The rest of the trip I ate like a monk.  Sparingly.  No ravioli, no pizza, no tiramisu.  No wine, no sugar, no breads, no grains.

The wedding was saved!  At least for this mama…

After our Pompeii tour we lunched at a winery in the modern city of Pompeii our shuttle driver drove us to Positano.  The Amalfi Coast–as you can see in some of these photos–is stunning.

The cars and motorcycles zoom around the curves like acrobats avoiding falling off the steep coast into the sea.

I didn’t look down.  I actually may have said a prayer or six.

Most of these photos are provided courtesy of our son, pictured above with his lovely bride.  We attended their wedding in the fall of 2012 in San Diego. (Their wedding was just as wonderful!)

How can one adequately describe such a beautiful place as Positano?  I have no words.  It is one of the most amazingly beautiful towns we have ever visited.  If you ever have a chance to travel to the Amalfi Coast in Italy–don’t hesitate.

You will not regret it. 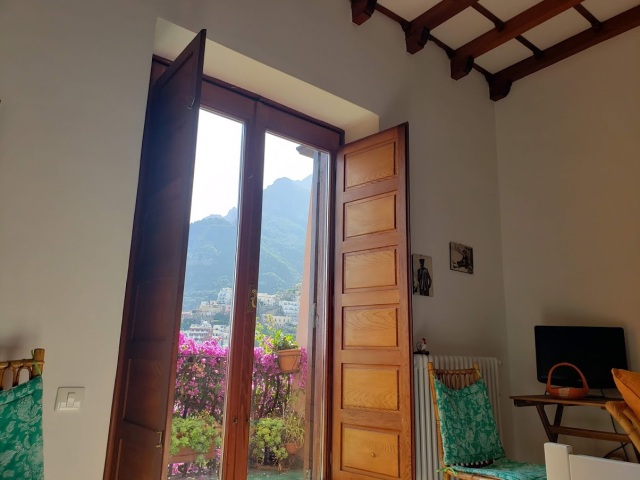 Here are some pictures of our Airbnb rented villa.  As you can see, it was lovely.  Our son found it online and we shared it with him and his wife.  By the designs of a crafty Universe we “accidentally” ended up next door to our daughter and her fiance!!  How synchronistic was that?

The only challenge with our villa:  the Wifi refused to work with any dependability.  Our TracFone also didn’t operate in Italy (except with occasional Wifi) so we were often inconvenienced.

One of the delights of the villa:  a long balcony planted with beautiful flowers overlooking the Mediterranean Sea. Softball sized lemons grew from a tree at the end of the balcony.  We often sat out gazing at the magnificent view.

I still cherish a late-night memory of the family (including our soon-to-be son-in-law) and the laughter as everyone sipped the town’s famous Limoncello with the twinkling lights of the city beneath us.

Except I did not sip the Limoncello.  With the stomach still tentative I drank sparkling water and counted my blessings. 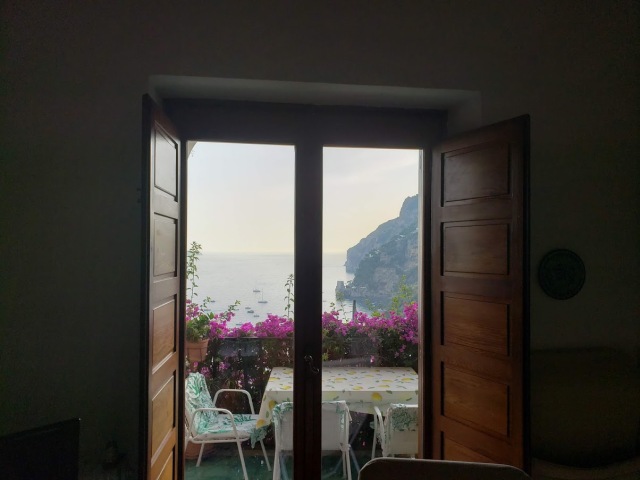 The day before the wedding we took a boat trip to the Isle of Capri.

Both of my brothers and their partners attended the wedding.  That was one of the greatest gifts–to be with them for this special occasion.  I felt so grateful that they made the time and effort to join us in the celebration.

The wedding took place in a restaurant high above Positano. 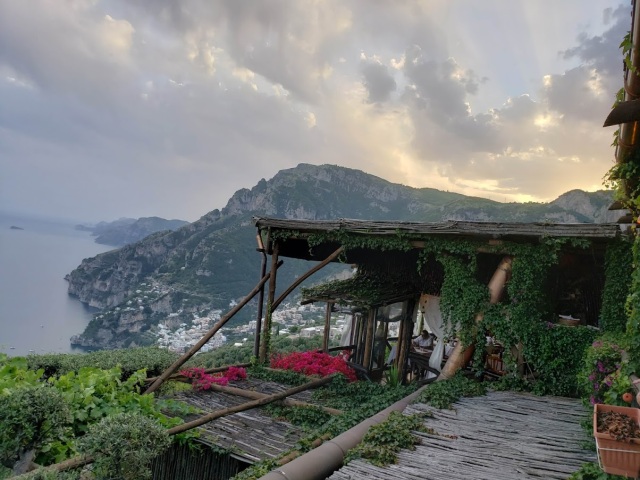 We looked down to see specks of boats shining in the sea. 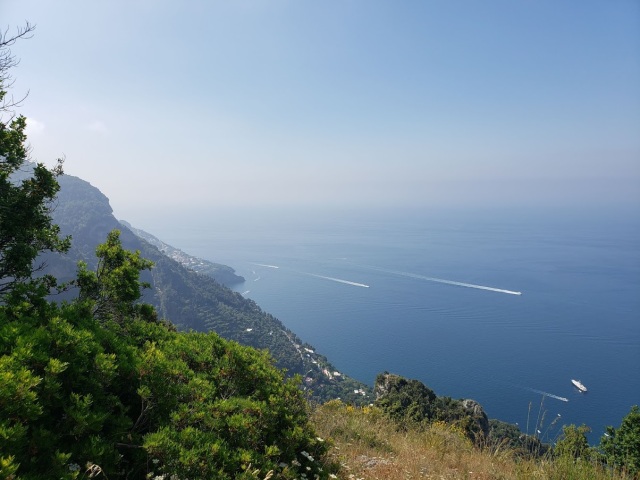 We listened to the beautiful heart vows written by both the bride and groom.  This was one of my favorite parts of the wedding!  I learned so much about their relationship just by listening what they chose to express to one another.  Their friend, Justin, officiated the ceremony.  It was delightful listening to his observations as well.

The bride and groom met in New York City ten or eleven years ago.  He proposed to her in Belize. And here they became wife and husband. 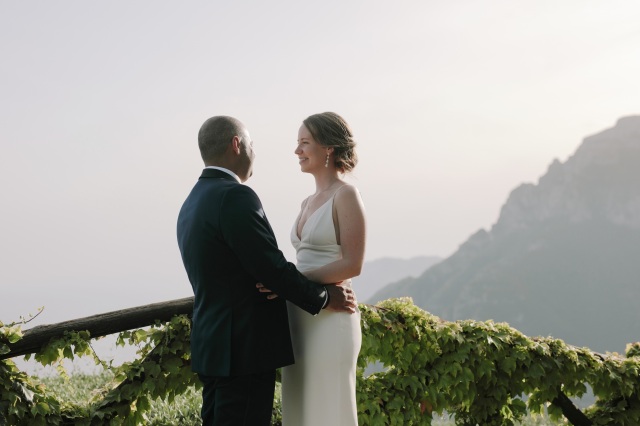 In “real life” they now live in Portland, Oregon.  We don’t get to see them as often as we would like.

Italians, like most Europeans, stretch meals forever.  I don’t recall exactly but they may have served five or six courses.  The appetizers arrived first.  So many appetizers–an entire meal’s worth of food! But the courses kept arriving, hour after hour.  We started eating around 5 or 6 p.m.  The desserts appeared around 11 p.m.   In between courses we talked, drank, laughed, sang, enjoyed this special time together.

At some point in the evening a local musician appeared to play his guitar and sing. “Mama Pasta”  came out of the kitchen and joined in the revelry as we waved our cloth napkins as accompaniment.

It was a trip and wedding we will remember all our lives.  Thank you for joining us on this one year anniversary to celebrate the love of our daughter and son-in-law.

I live in the middle of the woods in Michigan's Upper Peninsula. Next to Lake Superior's cold shores. I love to blog.
View all posts by Kathy →
This entry was posted in June, 2020 and tagged Airbnb, Amalfi Coast, family, Italy, limoncello, memories, photography, Positano, travel, villa, vows, wedding. Bookmark the permalink.

40 Responses to One year memories of Positano, Italy wedding