When the brakes fail…and you buy a new car…

Through the rear-view mirror

Last Wednesday we loaded up the 2015 maroon Chevy Malibu with 79,950 miles with boxes and bags of recycling and returnables. Off we drove toward Houghton for our weekly shopping excursion.

Less than eight miles from home a warning sign flashed on the screen.  The brakes pulsed and stuttered and briefly disappeared, pedal reaching the floor.  The car pulled to the right.  My body pumped with adrenaline as I maneuvered the vehicle off the road. What in the world was going wrong with our trusty car?

We turned around and headed back home–husband driving this time–and limped it to the mechanic the next day.  Trusty mechanic advised that the code meant the automatic braking system needed dealer-only repair.  He thought it safe to drive, so we made an appointment up in Houghton with the dealership there.

Then the husband and I got talking.  Might it be time to consider purchasing a new used vehicle?  While the old maroon Malibu still had trade-in value?  She sported some rust due to our winter road salt, and the rust would only get worse.  Her seats were also ripped.  Who knew what else might happen as she approached her 100,000th mile marker?

A little background.  Barry and I have been some of the most frugal car purchasers in the country.  We’ve been known to drive a car into the ground.  Not sure if we ever hit 200,000 miles, but we’ve driven our Fiestas, Buicks, Fords and Chevys until they literally had no ooomph left in ’em.  We’ve bought them cheap, fixed them up, and driven them through ice, snow, rain and woods.  Barry’s got the car-painting touch, and he’s repainted many buggies.  He’s also wrenched over them in the garage, year after married year.

This is how long we usually drive our vehicles.  (Ha ha, just kidding, we never even drove this old Studebaker.  It just sat in the woods looking “pretty” for many years.)

We’ve never bought a brand–new car in our 40-plus years of marriage.  We wouldn’t know what to do with a new car.  Barry agreed that maybe it was time to replace this Chevy Malibu–but not with a new vehicle.  We would look for a 2019.  Something with maybe 30,000 miles.  Yes, that’s what we’d do.

Our appointment at the dealership for repair of the ABS system was scheduled for yesterday at 2 p.m.  We drove both of our cars on the 45 mile trip north.  (He drove the Malibu, in case the brakes caused problem.  He would figure out the downshifting if needed.)

We asked the dealership about a 2019 Chevy Malibu with 30,000 miles.  I insisted upon silver.  The car had to be silver because our dusty and snowy dirt road likes to show off its dirt on red, black, blue or any dark-colored car.  My darling maroon Malibu has looked like an abandoned dirty child during most of its life because of our road.  You wash it and the next day it’s back to ugly. Barry’s silver Equinox doesn’t need to be washed for weeks (or months) and still looks acceptable.

How about you test drive this dark blue 2020 Malibu with ZERO miles?

Barry frowns steadily at me.  I grin back. He must know it’s my secret desire to have a new car for the first time in my life.

We take off for a test drive.  The seats are soft and comfy.  Nice!  A backup camera exists.  What a find!  So few miles.  Dare I even dream?? 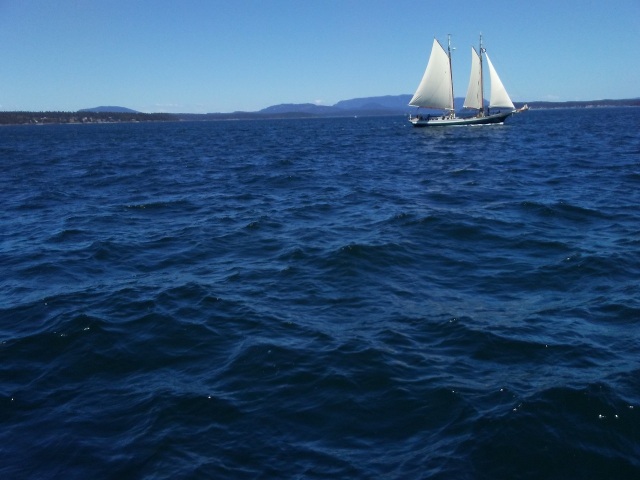 Dream a little dream for me

To finish off this tale without further ado–we ended up buying a brand-new car!  The first in our married life!  I am the happiest new car owner in the woods.  Because we insisted upon silver, we need to wait until it arrives up in Houghton later this week.  And it didn’t end up costing a small fortune because the errant maroon Malibu did provide some trade-in value. Barry doesn’t even seem TOO perturbed.  🙂  After all, he did sign the paperwork without any fussin’ or moanin’.

I promise to show you a picture of the car after it’s settled in to its new home.

In the meantime, I want to show you a picture of a skeleton.  For no reason except that we glimpsed it hanging in a window in Houghton yesterday.  It struck me so strongly.  Perhaps it belongs to a college student no longer on campus.  Don’t you love when random things like this appear in your day? 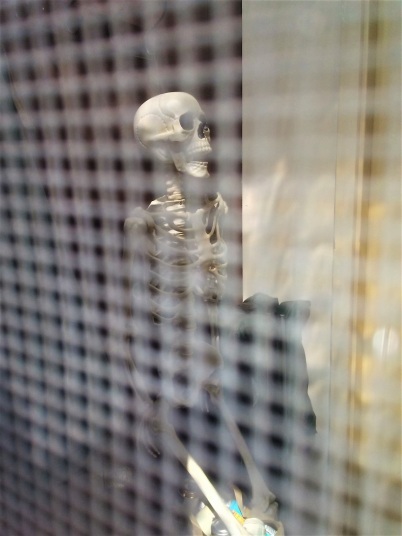 Please watch your step, dear reader, as you exit back into your everyday ordinary and precious life.

I live in the middle of the woods in Michigan's Upper Peninsula. Next to Lake Superior's cold shores. I love to blog.
View all posts by Kathy →
This entry was posted in July, 2020 and tagged brakes, car, Chevy Malibu, dealership, humor, personal, repairs, Upper Peninsula. Bookmark the permalink.