Secret of the fuzzies, friends and Finn Fest–and bears. 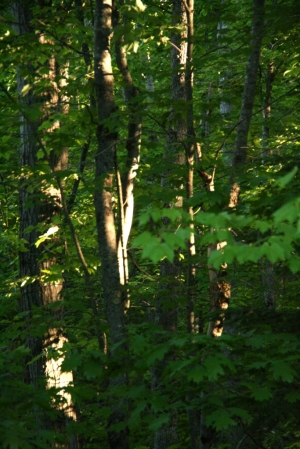 It looks like it’s snowing here in Upper Michigan as the summer Solstice approaches.  In between the green leaves a cascade of white fuzzies fill the sky.  The fuzzies pile up on decks, front porches, in between newly planted tomato plants.  It’s the Time of the White Fuzzies.  It happens every year, no matter what.

Of course, this year the white fuzzies came late, due to our Long Winter and delayed spring.  They’re about three weeks late.  From what trees do they come?  We don’t know.  Downstate, where my parents live, the white fuzzies come from cottonwood trees.  The fuzzies fill up their garage.  But ours come from…well, we don’t know.  We don’t have cottonwoods. Perhaps poplar or maple buds?  It’s one of those mysteries that someone, someday, will share with us.  Then we’ll know the secret of the fuzzies.

The way the light shines in the forest just before sunset.

It’s also been a bit busier than usual around here.  We can go for months without having company.  Then suddenly, like the rain of fuzzies, you see lots of friends.  Last Friday Deb and Chuck came for dinner.  We served salmon, fresh from Lake Superior.  Deb brought roasted asparagus salad with lettuce fresh from her greenhouse.

She showed us pictures of her new baby grandson, Zev, on her smart phone.  What a cutie!  Her son is our son’s best buddy.  They grew up together from the time they were wee fuzzies.

Then she showed me some pictures of a bear in a green grassy field.  She and Chuck took the photo while traveling back home from Wisconsin to the Upper Peninsula.

“That is the coolest,” I gushed.  “Could you send me those pictures?” 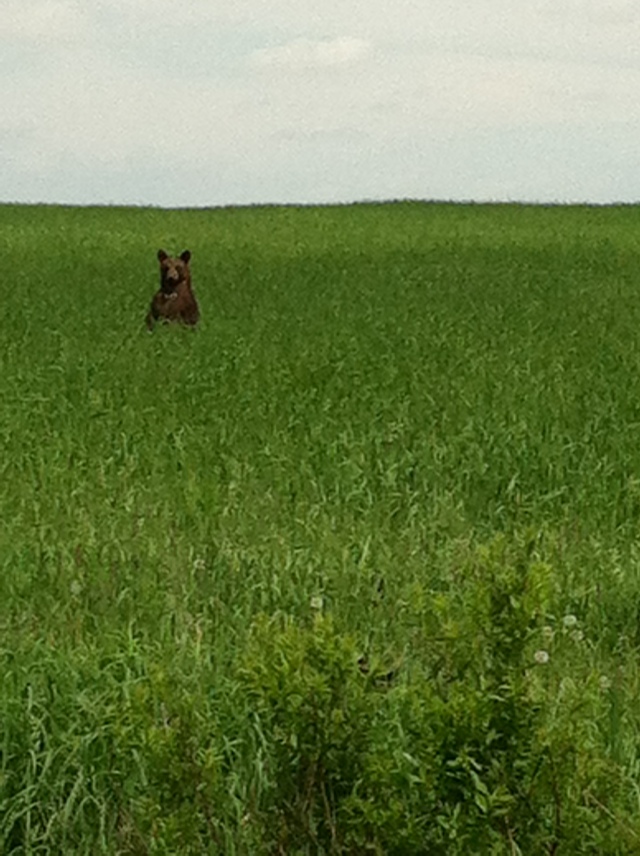 This is the photo I fell in love with on Deb’s phone.

On Saturday night our friend Anni stopped by–out of the blue–after a retirement party.  We talked for a couple of hours, at least until ten o’clock, which some of you know is after my bedtime.  Didn’t matter.  One should really stay up late this time of the year.  It’s so light.

We live in a unique place.  It doesn’t get dark until between 10:30 and 11 on Summer Solstice.  It’s because we’re located directly above Central Time–but we’re still in Eastern Time.

They hired a new employee at the newspaper where Barry works.  She’s lived here before, but must have forgotten.  She said, “It feels like I’m living in Alaska!”

Another cool view of the Bear.

On Tuesday I went out to a two-hour lunch with a friend I hadn’t seen in, oh, at least two years.  We talked and talked.  She likes to talk about spiritual things so we had a marvelous connecting chat.

Today my friend Bertha and I walked three miles.  Yep.  Don’t know if we talked faster than we walked, but, gosh, we sure had fun.  See what I mean about getting together with friends a lot?  A good week for that.

The clearest picture of the bear.

What else can I report?  They’re having a big Finn Fest celebration here this weekend.  To celebrate the many Finnish immigrants who settled here in this part of Upper Michigan.  It’s the biggest deal.  I may accompany my reporter husband as he covers some of the fun, so that’s our plan for this weekend.  Plus a going-away party for a young couple who is moving away.

That’s the news from our Little House in the Big Woods.  Just ordinary doings.  Enjoying the warmer weather, even though the garden almost frosted a couple of nights ago.

What have you been doing?  What ordinariness feels magical to you?

I live in the middle of the woods in Michigan's Upper Peninsula. Next to Lake Superior's cold shores. I love to blog.
View all posts by Kathy →
This entry was posted in June 2013 and tagged bears, blogging, family, Finn Fest, fish, friends, fuzzies, life, nature, outdoors, thoughts, Upper Peninsula. Bookmark the permalink.

82 Responses to Secret of the fuzzies, friends and Finn Fest–and bears.